This week, several Juntoists have offered useful guides for archival work in Spain, France, and England. Today, we are offering something slightly different—a guide to researching in North America! After all, not all early Americanists are American, and planning transatlantic trips can be daunting.

If you are planning on researching in North America, there are various things you might want to consider. Below is, I think, a basic list. It’s not exhaustive or ranked in order of importance (except No. 1. No. 1 is very important). The list is also based on the places where I have completed research; namely, in Canada, Fredericton, New Brunswick, and Halifax, Nova Scotia; in the U.S., Albany, Ann Arbor, Boston, New York City, San Marino, Newark, Washington Crossing, and Williamsburg. So, those of you who have researched in other places (e.g., Philadelphia, Washington, D.C.) or have some general tips, feel free to comment below and I will update this list as I can.

1. Make Sure Your Passport is Up-to-Date and Bring Documents

It’s obvious and simple but essential to a transatlantic trip. You do not want any surprises at the gate or at the border. Also, like Jessica Parr said yesterday, bring letters of introduction if you need them. Some archives can be strict. They could be useful at the border, too. It’s always better to have them than not.  Also, be sure to check if you need to complete any applications prior to travel (e.g., an ESTA application). If you’re on a Visa, whichever type it may be, be sure to bring EVERYTHING you think you MIGHT need.

2. Immerse Yourself in a Scholarly Community

While I was researching at the Harriet Irving Library at the University of New Brunswick (UNB), in Fredericton, I was fortunate to meet other scholars with similar interests to my own; namely, Bonnie Huskins, Gwen Davies, and Elizabeth Mancke, individuals who I have kept in touch with since that trip. I was also fortunate enough to meet Kathryn Hilder, who, though retired, came in to talk to me about my work and Loyalists, more generally. Hilder told me how she curated UNB’s wonderful Loyalist Collection and mentioned several collections that she thought might be useful. Perhaps the best source tip she gave me was the so-called “secret collection,” housed at the National Archives, Kew. She also put me in touch with Wallace Brown, who, if you work on Loyalists, know is a big deal! Similarly, if you’re at an archive in the U.S. like the Massachusetts Historical Society, weekly brown-bag lunches are very much a thing. When I was at the John D. Rockefeller Jr. Library, in Williamsburg, it was similar: informal, effective presentations, after-work drinks, and so forth. You meet a lot of very interesting people, many of whom you will likely keep in touch with.

3. Don’t Limit Yourself to One Archive 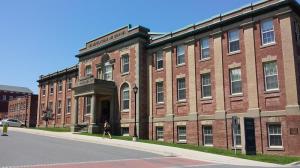 If you walk down UNB’s large hill, about half way down you will come across the Provincial Archives of New Brunswick/Archives provinciales du Nouveau-Brunswick. It’s not as big as the Irving Library, but it has some fabulous materials, including scrapbooks and land grants. Also, Saint John and Halifax, Nova Scotia, aren’t too far away and there are a number of potentially useful archives there, too. If you are researching in Albany, the New York State Archives and the New York State Library are on the same floor in the same building. The Albany Institute of History and Art isn’t far away, either.

No matter where you are, paying for short- and long-term accommodation can be prohibitively expensive. Of course, some places have more on offer than others, but as a viable alternative I would recommend emailing respective colleges or universities beforehand. There could be a faculty member or graduate student away for the summer, an individual who would happily let you stay! This might sound audacious, but it’s worked for me on multiple occasions. Before my trip to UNB, for instance, I emailed the History Department, telling them my dates and reasons for going and asked if there was a graduate student or faculty member who might consider letting me stay with them during my trip. I ended up dog-sitting for two weeks. It was perfect, and I am forever grateful! Emailing departments can work for long-term trips, too. When I was a Schwartz Fellow at the New-York Historical Society and The New School I sublet an apartment from a Columbia University Ph.D. candidate for the entire year, saving myself a lot of money.

5. Get a Prepaid Currency Card

Nobody wants to pay foreign transaction fees or carry a lot of cash. Before I went to Ann Arbor, in 2011, I got myself a Caxton Card. (There are other options, too.) It’s a simple alternative for those who do not want to carry much cash (like me). Some banks might let you open an account, depending on how much money will be going through it and how often you intend to use it.

This can be tricky. In some places, you should seriously consider renting a car. In others, you might even need to rely on someone’s help. For instance, Fredericton has a small airport. It’s more like a landing strip. Consequently, flights can be extremely pricey and you’ll need to make a connection through Montreal, Toronto, Halifax, or Ottawa, driving the price up even further. Taxis from the airport to Fredericton will be expensive, too. If you can, arrange for a kind soul to pick you up at the airport. The other option for Fredericton is renting a car. Many people I know who have traveled from the United States have driven up through Maine. The drive isn’t too bad, and having a car would give you more options for sightseeing while you’re there. Similarly, if you are researching at the David Library of the American Revolution, a car isn’t a necessity but it will enable you to travel outside the grounds as and when you like. When I was there, I rented a car. I also rented a car when I was at the Huntington Library.

One thing I’m often asked is, “How do you find driving here?” It was a bit scary at first (thanks, U.S. Route 1). But after a while driving (on the wrong side of the road) I was fine, even if I kept hitting my hand off the door as I went to change gear. (NB: I still do this.)

If you’re in a larger city, however, mass transit systems might become your best friend. New York City’s subway will seem daunting at first, but once you get the hang of it, you soon get used to the lines and stations. In Boston, the subway line might not be as big as New York’s, but it’s still a new system. Nevertheless, with a handy app of your phone or by looking at one of the nearby station maps, you’ll soon master your route and know where to get off. In Boston, it’s Hynes Convention Center for the Massachusetts Historical Society, Park Street for the Athenæum, and Harvard for, er, Harvard. In New York City, it’s Bryant Park for the Public Library; W 79th or American Museum of Natural History for New-York Historical; and so on. Also, be sure to pick up and load money onto a MetroCard in New York ($1 fee) from a subway station and a CharlieCard (free) in Boston from a MBTA employee. Don’t confuse a CharlieTicket with a CharlieCard: tickets are made of paper and rides are more expensive; cards are plastic and give you a cheaper ride.

Somewhat related, as Jessica mentioned yesterday, taxis to and from airports can be expensive. So, if you fly into Newark (for NYC): get the New Jersey Transit into Penn. Station New York (NOT PENN. STATION NEWARK!!!!! SPEAKING FROM EXPERIENCE HERE!). It’ll be much cheaper, and could even be quicker, depending on where you are going. If you fly into Boston, taxis shouldn’t be too expensive, but public transport would suffice. Sadly, if you want to go to Ann Arbor, it’s likely that you’ll have to get a taxi. I’ve gone from Detroit to Ann Arbor a few times. The price varies, so shop around, but don’t pay an exorbitant amount (e.g., anything nearing $100). I’ve used Ann Arbor Metro Airport Car a few times and it’s been great.

Don’t work 24/7. Take some time off to see the place you are visiting. I’ve often focused too much on “The Research,” but after a gentle nudge I realized that I had to take advantage of my surroundings. Take, for example, my trip to New Brunswick. The Maritimes is a beautiful place. I saw some wonderful and historically significant sights: the Bay of Fundy, Gagetown, Saint John. There were many others. Absolutely do the same! Take advantage of as much as possible—you never know when you’ll be back! And if you’re somewhere else, take advantage of the sights there, too, some of which might be relevant to your work!

“There’s a cheapish shuttle from the airport in Detroit to Ann Arbor: http://myairride.com/

I’d also say as an American who spent a ton of time driving around the U.S. for research, having a GPS saved my life. I’d imagine that especially if you’re coming from abroad, buying a Garmin or even renting one would help cut down on some of the planning.”

“I would add to not discount taking buses or trains to get between places if they’re within a few hours of each other. Trains are much more viable in the US (and particularly the Northeast) but buses can be quite cheap and very helpful (if a little gross on occasion).

I thought of this particularly in connection to your Fredericton story—flights into Halifax tend to be cheaper and more flexible, and Maritime Bus runs a line direct from the Halifax Airport (or downtown Halifax) to the center of Fredericton. It’s a little tricky to figure out regional rail/Amtrak/Via/bus connections for places you’ve never been, but for the US I’ve found the website Wanderu.com very helpful—it also includes some major Canadian transit hubs. Canada at least has fewer options so it’s a bit easier to suss out!

Oh, and particularly for Canada, the LAC and the Nova Scotia Archives are in the middle of some very serious digitization projects, so before you go definitely check their websites to make sure what you want isn’t already conveniently available online!”