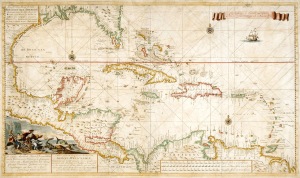 “The heart of the English Empire in the seventeenth-century Americas was Barbados,” according to Justin Roberts in his recent William and Mary Quarterly article.[1] That claim is perhaps not surprising—Richard Dunn established the social and economic importance of the island over thirty years ago in his seminal work, Sugar and Slaves. However, Roberts takes that point further by exploring the political ramifications of all of that Barbadian wealth in the West Indies. His article also speaks to a larger sea change in the historiography of the seventeenth-century Caribbean.

It goes without saying that the article is worth reading in full as what follows is only a brief summary. Roberts describes Barbados in the mid-seventeenth century as a metropole in its own right where “Barbadian-centered colonial models of development … were enacted with no explicit encouragement from London” (226). Specifically, Roberts argues that Barbadian leaders like Francis Willoughby encouraged the spread of the island’s surplus population to Surinam to continue the growth of sugar plantations there. This expansion, moreover, “would end up being at odds with the larger imperial designs of the English state in the 1660s,” and when the ink dried on the Treaty of Breda those imperial officials would sacrifice “Willoughby Land” to the Dutch in exchange for New Netherland (226). In part, this diplomatic turn reflected the desire among English imperial planners to channel settlers, credit, and enslaved populations to the newly conquered island of Jamaica. That England surrendered Surinam in negotiations at the end of the Second Anglo-Dutch War, moreover, demonstrates the ways in which Roberts’ scholarship corrects previous assumptions about how colonial actors and the state functioned in the English Atlantic World. The English state was effective in exerting its will throughout the seventeenth-century Caribbean. In fact, as Roberts argues, the fate of Surinam demonstrates an English state that “checked the power and autonomy of prominent Barbadian sugar planters, countered the Barbadian-centered vision of empire with their own, and spurred the development of the Jamaican sugar economy” (256). The logical conclusions of that statement should resonate with any scholar interested in the relationship between England and the colonies in that first century of settlement.

Perhaps more exciting for Caribbeanists is the fact that Roberts’ work is far from speaking into a vacuum. Carla Gardina Pestana’s recent article, “Early English Jamaica without Pirates,” also reevaluates commonly held assumptions about the seventeenth-century English Caribbean.[2] Also worth reading in full, Pestana takes a fresh look at Edward Doyley’s famous 1657 letter to the “buccaneers” of Tortuga, which has always been interpreted as a request from Jamaica’s governor to the pirates of the neighboring island to provide protection against possible Spanish reprisals. According to Pestana, “scholars embrace this erroneous idea … because it contributes to an accepted narrative of the island’s early history” – namely that Jamaica went through a “Wild West” phase exemplified by the stateless pirates upon whom the English governor depended for protection (324). However, Pestana reveals that at least fifteen vessels of the English Navy defended Jamaica’s harbors in the same year Doyley wrote to the buccaneers. Doyley did not need Tortuga’s famous buccaneers for maritime defense, he needed skilled hunters who could kill the island’s feral cattle and feed to troops occupying the island. As Pestana argues, the English invasion of Jamaica may have initiated a new era of Caribbean piracy but the defense of the island during the tenure of Edward Doyley came from the strong presence of the English Navy and not the other way around.

As an early Americanist and a Caribbeanist, I read these articles with renewed excitement about the possibility of scholarship on the early seventeenth-century Caribbean for what it can say about #VastEarlyAmerica. The work discussed here – and the many, many recent publication not discussed here – roundly reject what several Caribbeanists I know call the “Continental Toehold Dilemma.” For some graduate students interested in Caribbean history, there is often pressure to position one’s research in relation to the historiographic center of gravity that is the thirteen seaboard colonies (or Spanish America if one’s research involves Spanish-speaking islands). We call it the need to have a toehold on the continent. However, if Pestana’s and Roberts’ articles serve as any indication, it might be safe to say that the Continental Toehold Dilemma is a thing of the past, with the future wide open for innovative work in the early Caribbean world.

[1] Justin Roberts, “Surrendering Surinam: The Barbadian Diaspora and the Expansion of the English Sugar Frontier,” The William and Mary Quarterly, Third Series 73, no. 2 (April, 2016): 225.