Jeremy C. Young is an assistant professor of history at Dixie State University and the author of The Age of Charisma: Leaders, Followers, and Emotions in American Society, 1870-1940 (Cambridge University Press, 2017).

Too often, as American historians, we imagine the Civil War as an impenetrable barrier between eras—as if American history simply stopped in 1861 and an entirely new nation, filled with new people, came to replace it. In reality, of course, people who cast their first ballots for Andrew Jackson cast their last for William Jennings Bryan; people born into slavery died after the advent of talking motion pictures. Nevertheless, professionally speaking, we’re often tacitly discouraged from placing the antebellum and postbellum worlds in conversation with one another. This way of thinking disadvantages historians of the modern era in particular, I think, in that it makes us less likely to investigate the early American roots of the phenomena we study. In my case, it explains why it took me so long to realize that the story I was telling about the 1920s actually began in the 1820s. I want to tell you about that moment of discovery, about how my reluctance to look at early American history almost caused me to miss the most explosive revelation in my book—and about what I found when I finally pulled back the curtain to reveal the early-American origins of my narrative.

My book is, in part, the biography of a speaking style. This style is most familiar to us today from a 1923 recording of William Jennings Bryan’s 1896 speech “The Cross of Gold,” which you can listen to below:

You’ll notice a few distinctive features of Bryan’s speaking style that sound odd to modern audiences: his expanded pitch range (the highest point of a phrase is pitched higher, and the lowest lower, than in ordinary speech), a singsong poetic phrasing, and the round, resonant tone quality for which Bryan was famous. You’ll also notice the exuberant gestural style shown in photos of Bryan, like this one, taken in 1908. 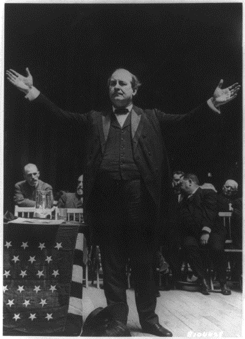 In my research, I discovered that this speaking style had a name: Americans of the time called it “personal magnetism.” In fact, it was quite common in the late nineteenth and early twentieth centuries; numerous politicians, ministers, and social activists, including Henry Ward Beecher, Frances Willard, and Marcus Garvey, deployed some version of the magnetic style. What’s more, listening to leaders speak in this way was a deeply emotional experience for millions of Americans; in their letters, followers of magnetic figures described themselves as “different” or “new men,” “changed,” “shook up,” with “new” or “awakened hearts” filled with “joy and love.” Personal magnetism so transformed their lives that they converted to Christianity through magnetic evangelists, voted for magnetic politicians, joined social movements led by magnetic activists, and changed the culture of leadership to demand emotional connections with leaders in all walks of life—a key feature of American leadership styles to this day.

Where did personal magnetism come from? For a long time, I wasn’t convinced it was an interesting question. Bryan spoke the way he did because audiences responded to it; his style grew organically out of the cultural milieu he inhabited. Pressed by family and friends to dig deeper, however, I kept looking. There wasn’t a lot of literature on the specific speaking style Bryan used, but I knew he had studied elocution (the predecessor to modern public speaking courses) in college at the University of Nebraska. Eventually, I stumbled upon a trail of bread crumbs that led me straight to the origins of personal magnetism – origins which turned out to be very interesting indeed.

The trail began with A History and Criticism of American Public Address (1943), a ponderous three-volume tome edited by Wabash College speech professor William Norwood Brigance (and completed after his retirement by Marie Kathryn Hochmuth).[1] A towering figure at Wabash—if you travel to rural Crawfordsville, Indiana, you’ll see his name carved into the stones of the main campus building there—Brigance amassed an exhaustive compendium of information about the elocutionary styles of a number of important American orators. This volume and its sister publication, The History of Speech Education in America (ed. Karl R. Wallace, 1955), are virtually forgotten today.[2] Nevertheless, the four volumes together form a treasure trove of information about the history of American public speaking; they were unquestionably the most important secondary sources I used when writing my manuscript.

In Karl Wallace’s book on the history of speech education, I found a chapter written by speech researcher Lester L. Hale about a man named James Rush.[3] A brilliant, reclusive Philadelphia medical doctor, Rush was the son of Dr. Benjamin Rush, the renowned Revolution-era intellectual and signer of the Declaration of Independence (and, incidentally, also the subject of yesterday’s excellent Junto guest post by Spencer McBride). James Rush, explained Hale, was the most important figure in the American nineteenth-century elocution movement; his techniques were ubiquitous among schools of public speaking before 1900. Nevertheless, Rush’s book had been published in 1827, so it couldn’t have been responsible for the speaking style of Bryan, Beecher, and others, could it? Even with Hale’s essay pointing me directly to the source I needed, I wasn’t convinced that an antebellum book could explain my postbellum phenomenon. Accordingly, it wasn’t until three days before the deadline to submit my dissertation to my committee that I finally downloaded an electronic copy of James Rush’s The Philosophy of the Human Voice (1827) and began to read.[4]

I really wasn’t prepared for what I found in Rush’s book. For one thing, the scale of Rush’s ambition was breathtaking. Rush’s goal was nothing less than “to bring the art of speech within the pale of science”–to develop a universal set of speaking techniques that “will enable an Elocutionist of any nation, to reduce to established form, the best modes of speech in his language.”[5] Rush rejected the idea that oratory was an innate skill. “The high accomplishments in Elocution are supposed to be, universally, the unacquired gifts of genius,” he scoffed; “So seem the plainest services of arithmetic to a savage.”[6] Instead, Rush believed he could democratize oratorical technique, so that anyone with a good education and rigorous study habits would be able to speak well on any subject.

Much of The Philosophy consisted of an astute, prescient description of what modern-day linguists would term suprasegmental phonetics; Rush’s work in this area predated formal linguistic study of the subject by fifty years.[7] The most influential aspect of Rush’s book, however, lay in his unique system of elocution. Rush believed that individual vocal techniques were scientifically connected with specific emotional responses. “The fact is,” he wrote in his notes, “that the various classes of ideas we call feelings, have a certain set of sounds offered by nature as their representatives;” Rush felt he had conclusively identified “a system of principles…which are accommodated to the temper and habits of the English ear; and which…may be called the ideal beauty of speech.”[8] Of course, no such “ideal beauty” exists; Rush was in effect imposing his own aesthetic preferences on the structure of oratory.

After reading The Philosophy, I immediately recognized that Rush’s “system of principles” was identical to what my late nineteenth-century audiences were calling personal magnetism. Rush advocated an expanded pitch range, or as he put it, speaking in intervals of the octave or fifth, rather than the customary third.[9] He encouraged speakers to adopt the singsong quality of what he termed “the melody of speech,” using poetic principles in compiling phrases and sentences.[10] Finally, he urged his readers to adopt what he termed “the orotund voice,” lowering the larynx to enlarge the upper throat and creating a rich, operatic tone which could be projected at great distances – a sound quality termed “advanced tongue root” by modern linguists.[11] Jonathan Barber, an English elocutionist who repackaged Rush’s ideas into a popular series of elocution textbooks, added the last piece of the puzzle: a dramatic system of gestures Barber borrowed from the English clergyman Gilbert Austin.[12]

Over the next century, as I eventually learned, many of America’s leading public speakers, including William Jennings Bryan, abolitionist orators Wendell Phillips and Henry Ward Beecher, and evangelist Billy Sunday, studied these techniques in university elocution programs, and the curriculum had a powerful impact on their speaking styles. For instance, Barber’s 1831 gestural illustrations are almost identical to the photographs of William Jennings Bryan taken in 1908. (Photos of Bryan courtesy the Library of Congress, Prints and Photographs Division.) 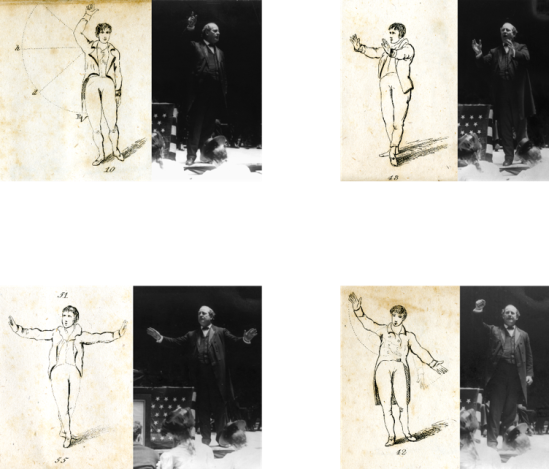 Personal magnetism was not a speaking style that emerged organically from late nineteenth-century American culture. It was invented by a specific person, in a specific place, at a specific moment in time. The fact that that moment occurred before the Civil War almost caused me to overlook it. It’s a mistake I think many modern American historians make—and one I’ll be careful not to make again.

[6] Rush, The Philosophy of the Human Voice, xxii.