Billy Coleman is a Postdoctoral Fellow in History at the Kinder Institute for Constitutional Democracy at the University of Missouri. He received his PhD from University College London (UCL), and is currently completing a book manuscript called, “Harnessing Harmony: Music, Power, and Politics in the United States, 1788-1865.”  He is also the US-based book review editor for American Nineteenth Century History and the author of “‘The Music of a well tun’d State’: ‘The Star Spangled Banner’ and the Development of a Federalist Musical Tradition” (Journal of the Early Republic 35, no. 4). 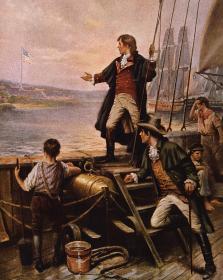 As I type, President Donald Trump is tweeting: “#StandForOurAnthem.” The presidential hashtag was created in response to over two hundred NFL players who this weekend chose to protest racial injustice and police brutality by kneeling, sitting, raising fists, or linking arms in solidarity during the national anthem. Their actions add to what is now a year-long protest movement surrounding “The Star-Spangled Banner,” started initially by former 49ers quarterback Colin Kaepernick. Now, the controversy has expanded significantly in defiance of President Trump’s suggestion that NFL team owners should “fire or suspend” players who “disrespect” their country by refusing to stand for the anthem.

The central role of the national anthem in these protests has sparked a remarkable public debate–one that, if anything, has served to remind Americans that patriotic music is not necessarily the ideologically neutral vessel we sometimes think it is, or wish it to be. Last year, when Kaepernick initially explained that he wasn’t standing up for the anthem because, as he put it, “I am not going to stand up to show pride in a flag for a country that oppresses black people and people of color,” the response was emotional. A direct descendant of Francis Scott Key–his great great great granddaughter–said that the protests had left her “heartbroken.” Another critic on social media was so angry he decided to burn Kaepernick’s jersey. And while some conservatives fumed that Kaepernick was at the head of “an army of progressives…coming for the Star-Spangled Banner” others on the Left doubled down, arguing that the national anthem is a celebration of slavery that should be replaced.[1]

Clearly, the heat in these disputes derive from something deeper than support for or against the song itself. Critics of the protests broadly claim that it is wrong for athletes to abuse their right to free speech by challenging the symbols that reflect that right in the first place. While defenders argue that free speech is hardly protected if peacefully protesting institutionalized injustice is somehow out of bounds. Now, President Trump’s most recent suggestion that players protesting the anthem should be punished has helped connect all the above to an even larger dispute over the substance of American patriotism: specifically, does being patriotic have more to do with celebrating the nation as it is or pointing out how much better it could be?

“The Star-Spangled Banner” is no stranger to debates over patriotism and protest.[2] But few realize that the politicization of patriotism lay at the heart of the song’s creation. While most of us tend to associate music’s political power predominately with its ability to enable anyone with a voice, a melody, and a message to speak truth to power, it is also true that many early American elites (including the song’s author, Francis Scott Key) were enamored by a more conservative conception of music in politics—one that more readily located the political utility of music in its capacity to shape popular opinion from a position of power and privilege. In this sense, President Trump’s recent use of “The Star-Spangled Banner” to try and define American patriotism on his own terms is of a piece with the same conservative musical tradition that helped motivate the song’s original composition.[3]

One of the earlier adherents to this conservative conception of musical power was a Federalist lawyer named Joseph Hopkinson, who penned “Hail Columbia” in 1798. At the time, he explained to George Washington that the song was intended to help ameliorate the evils of partisanship by supporting a return of the non-partisan form of patriotism that founders like his correspondent had advocated all along. Yet, Hopkinson’s letter betrayed partisan sensibilities of its own: condemning murderous French melodies (popular with Republicans) but not British tunes (popular with Federalists), inferring that Americans were lacking in unity not liberty, and setting the song itself to a Federalist-favored tune called “The President’s March.”[4] Republicans, for their part, disputed the patriotism of “Hail Columbia” immediately, characterizing it instead as a Federalist conspiracy meant to hijack American patriotism by framing consent to the Federalist administration as a patriotic citizen’s only real option.[5]

Later, during the War of 1812, another young Federalist lawyer would again look to music to combat another partisan political crisis. Francis Scott Key never directly revealed what influenced his decision to write “The Star-Spangled Banner” but his political reflections at the time jar with our common acceptance of the idea that it emerged purely from his famous moment of patriotic inspiration aboard a British warship during the Battle of Fort McHenry. Before and after this experience, what chiefly concerned Key was the deleterious influence of parties, the importance of patriotism, and the need for a restored sense of American unity. Key, in fact, had been in the midst of repeatedly advocating plans for establishing an “anti-party” newspaper, which he explained would be a “fair honest paper opposing the administration & disclaiming Party.” It was hardly the model of non-partisan patriotism one might have assumed Key had in mind. But Key, like Hopkinson, wanted a return to the “spirit of ’76,” and in the process had no trouble convincing himself that his “anti-party” measures could be used as a means for delegitimizing those with whom he disagreed.[6]

All of which is to say that “The Star-Spangled Banner” did not emerge out of a single moment of patriotic vision. For Key the song formed part of a larger effort to unite Americans around his own way of thinking—for the country to rise above party in order to recognize the wisdom of his own point of view. Of course, elite men like Key who put music into early American public life generally claimed its influence would be uplifting, elevating, refining; that it would make American democracy a more appealing and respectable place. But these justifications were not politically neutral assertions. Instead, the expectation that music would provide a natural defense against partisanship–that it could cultivate a more unified and harmonious society—more often than not tended to justify elite power and conservative values in the face of rapid social change.

In 2017, reactions to the protests surrounding the national anthem highlight the extent to which the value of musical patriotism remains, for many Americans, thoroughly conservative in nature. Despite all the radically political uses of music over the course of this nation’s history—and despite all the assumptions we tend to hold about what it means to put music and politics together (much of which is loosely derived from a certain kind of collective memory of the civil rights era) many Americans are still drawn to, and protective of, the more conservative contributions of the anthem: the sense of order and respectability it can project, its power to unify Americans under a (supposedly) common set of principles, and its capacity to remind Americans of the sacrifices of their forefathers (a nation forged in battle). The challenge of taking a knee during the anthem is that it turns all of this on its head. All that order, all that unity–none of it, the protests suggest, really exist—at least not yet. But as President Trump’s contribution to the debate suggests, music continues to hold an allure for elites seeking to politicize patriotism in support of their privilege.

[1] The racial dynamics of the Trump’s response to the protests in 2017 are significant and have been well-covered. See, for example: Jamelle Bouie, ‘“Us” Versus “Them”: Trump’s Obsession with the NFL Protests above all else shoes us just whose president he is,’ Slate, September 25, 2017; Alexander Burns, ‘Defying Trump, Athletes Intensify Debate on Race and Protest,’ The New York Times, September 24, 2017.

[2] Jimi Hendrix’s rendition of the anthem at Woodstock in 1969 or Tommie Smith and John Carlos’s black power salute from the medal podium at the 1968 Olympics are just two of the most famous examples. For more on Hendrix’s performance of the anthem, see Mark Clague, ‘“This is America: Jimi Hendrix’s “Star Spangled Banner” Journey as Psychedelic Citizenship,’ Journal of the Society for American Music 8, no. 4 (2014): 435-78.

[3] I argue elsewhere that this conservative musical tradition began in the United States as a distinctively Federalist musical tradition, see William Coleman, “The Music of a well tun’d State”: “The Star Spangled Banner” and the Development of a Federalist Musical Tradition,’ Journal of the Early Republic 35, no. 4 (2015): 599-629.