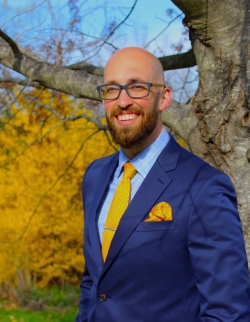 Today’s interviewee hardly needs introduction for readers of The Junto. Ben Park is an assistant professor of history at Sam Houston State University in Texas; he earned his PhD in Britain’s second-best history department, at Cambridge University; and went on to hold a postdoctoral fellowship at the Kinder Institute on Constitutional Democracy. Far more importantly, of course, he is also the founder of this blog, and author of the recent monograph American Nationalisms: Imagining Union in the Age of Revolutions, 1783-1833 (Cambridge University Press, 2018). Ahead of our review of the book tomorrow, I asked him a few questions about it.

JUNTO: “Empire” has been one of the most dynamic concepts in the recent historiography of the eighteenth and nineteenth centuries, not just in the United States but globally. Conversely, it sometimes seems as if the closer we look at “nationhood,” the more it fades away. Is American Nationalisms a challenge to those recent trends?

Just kidding. First, let me first say that much of my work builds on the recent imperial school of scholarship, and I would hate to see American Nationalisms be seen as a correction. If anything, I am mostly taking their work for granted—that American had imperial ambitions that shaped how they approached democratic governance, territorial expansion, and racial oppression. Recognizing America as an imperial power with an imperial agenda is the starting point for nearly all scholarship.

But. I think that sometimes we think that seeing America as empire means overlooking America as nation. For many in the early republic, becoming a successful empire required also being a coherent nation—that is, imperial acts were often based on nationalist assumptions. Who belonged to the imperial body? Who defined imperial interests? For one example, many in New England imagined a successful nation as a contained and coherent body huddled along the eastern seaboard and tethered to Atlantic trade; as America moved westward to realize Jefferson’s “Empire of Liberty” vision, they dissented, most famously seen in the Hartford Convention. The conclusion of the War of 1812, however, vindicated the more imperial form of nationalism that would come to dominate America throughout the nineteenth century. But that was far from assured.

JUNTO: Is there a useful distinction to be found between the concepts of “the nation” and people? The discourses you discuss obviously use both terms, but I wonder if you found that they have different valences, different connotations, that were politically meaningful?

PARK: This is a good question, and it hits the crux of the book. The easy, and lame, answer is, “it’s complicated.” As I try to show in the book, the very definition of “nation” was in transition during this period. For some, it meant a group of people with similar backgrounds, ethnicities, or religion; for others, it meant the federal union that held together thirteen—and later, more—states. And to add even more complexity, some believed that it was both: both a federal body and a general population. As seen in the Constitution and some of the arguments made in its favor, America was a “people” who shared the same loyalty and interests, and the federal government would serve as a mechanism that would regenerate society and make them a united population. For these federalists, the political nation could only work if there were a national people.

This idea fluctuates over the next five decades, often in different directions. In the 1830s, South Carolinians came to define “nation” as a group of people with shared interests, and therefore rejected the very notion that there was an American nationalism given deep-rooted sectional divisions. These ideas would then directly lead to political actions, as how one defined “the nation” had significant implications for how one envisioned federal power and political sovereignty.

JUNTO: The book argues that sectionalism was itself a form of nationalism — and that we can use this insight to unveil a series of ideological developments that link the Age of Revolutions to the era of Civil War. Are you hoping to draw scholars from those two fields into new conversations with each other?

But yes, as someone who maintains a deep interest in both the American Revolution and the Civil War (or at least the origins of the Civil War, since my interest drops precipitously once shots are fired on Fort Sumter), I am often struck by how divided the two literatures on these events are. Yes, there is a half-century between the even most generous parameters of these two eras, but as historians tasked with tracing significant changes over time, I’d love to see how cultural ligaments of America’s founding are connected to its disunion. Just one of the ways to do, and perhaps one of the most obvious ways given the political debates of both periods, it is through evolving perceptions of union and nationhood. How did southern states come to see themselves as a nation apart from the North? Well, the cultural tools had already been embedded in American discourse, as sectionalism had always been a particularly potent form of political action and nationalist imagination.

JUNTO: In the closing pages you explicitly refer to Donald Trump’s election and the forms of white supremacy with which he’s associated. What do you think are the main differences and similarities between the “nationalisms” in your book, and those that confront us in America today?

PARK: Writing the bulk of a book about national belonging during the Age of Obama—where many hopes were buoyed that America could become a more inclusive and progressive nation—but completing it in the Age of Trump was a jarring experience. But what struck me is not so much the differences, but the similarities: it is a common refrain that America has a “civic” nationalism, or a political body based on shared ideals, rather than an “ethnic” nationalism, like what is common in Europe. Trump’s racial populism, some argued, was a betrayal of America’s nationalist tradition.

But I was continually amazed at how ethnic America’s earliest conceptions of nationalism were. The southern pro-slavery nationalisms are obvious, but it was also prevalent in the North. New England Federalists portrayed a nationalism steeped in British stock, which they posited as the pure breed of liberty in contrast to the mixed societies that “plagued” the middle states. And even anti-slavery, pro-colonization activists in Pennsylvania who argued for the emancipation and forced removal of slaves could not envision a mixed-race society. As I wrote in a couple op-eds, there is a long genealogy of ethnic nationalisms that led to Trump’s election, and American Nationalisms offers some of those origins.

There were differences, of course. One of the most powerful examples is how nationalism was used as a positive tool to bring social change. In 2018, we are now conditioned to see nationalism as a bad thing—it’s parochial, superficial, and often nativist. But I was taken back by the nationalist discourse of anti-slavery activists like James Forten who posited that America’s founding ideals demanded abolition, diversity, and equality. It was in these voices—often from African Americans—that I saw a nationalist discourse that provides a more positive model than what we see today.