In 1779, a fashion plate depicting a woman’s garment “in the creole style” was published in Paris. Consisting of a lightweight muslin gown with wrist-length sleeves, the dress was “in the style of a chemise,” the basic female undergarment of the period.[1] Worn over a petticoat, the gown was to be pinned at the bust and loosely closed with a sash or belt. In addition to enumerating its various components, which included a separate caraco jacket, the engraving’s caption remarked that the fantastic ensemble was “of the sort worn by our French Ladies in America.” At the end of the Seven Years’ War in 1763, French colonial possessions in the Americas were largely confined to the Caribbean Basin, a region where interactions between people of indigenous, European, and African descent brought about innovations in everything from architecture to foodways. Although the inhabitants of French-controlled islands like Guadeloupe, Martinique, and Saint-Domingue, or Haiti, were not beyond the reach of Parisian novelty, the heat and humidity necessitated certain sartorial adaptations. 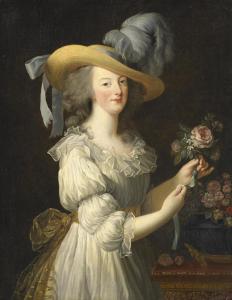 This included the variety of late eighteenth-century “chemise gowns” believed to derive from more comfortable, seemingly liberating attire donned by women in the tropics. Typically made of muslin, lawn, and other sheer textiles, such gowns were still worn with a support garment, including the whalebone-stiffened stays known as a corps in French. They were most famously adopted by Marie-Antoinette, who wore them at her private Petit Trianon estate on the grounds of Versailles. Unfortunately for the queen, a portrait of her wearing one was widely condemned when unveiled at the Paris Salon of 1783. Popular opinion held the choice of costume to be undignified for a royal consort and unseemly given the dress’s perceived resemblance to women’s underwear.[2] Dubbed the chemise à la reine in the wake of the infamous portrait’s exhibition, the dress nevertheless increased in popularity as more and more women across Europe took to wearing them, sometimes with straw hats in a trend that is generally attributed to pastoralism’s newfound fashionability. A rare survivor, a French chemise à la reine is held in the collection of the musée de la Toile de Jouy.

But what about the chemise gown’s supposed “American” origins? Piecing together what people wore in the Caribbean is no easy task. The same climate believed to have inspired the chemise gown also worked to ravage colonial wardrobes there, with physical traces mostly limited to archaeological artifacts like buttons and buckles. However, consider a side by comparison between a French image of a muslin chemise gown from 1786 and a detail from a contemporary painting by Agostino Brunias. In the latter image, a colonial woman in a loose white gown can be seen inspecting textiles for sale in a market on the island of Dominica.[3] In tropical and sub-tropical colonies across the Caribbean and Gulf of Mexico, then, it might seem that concessions to climate overcame censure of a type of garment simultaneously interpreted as West Indian but marked by royal scandal in France.

Printed from 1766 until the onset of the Haitian Revolution in 1791, Saint-Domingue’s first and only newspaper, the Affiches américaines, provides details on the people wearing, buying, and making actual chemises à la reine in the colony. For example, the Parisian Guertin sisters, who styled themselves marchandes modistes in Port-au-Prince, included chemises à la reine among their “freshest and prettiest merchandise” in May of 1784.[4] A few months before, a Monsieur Rousselière had advertised chemises à la reine alongside an assortment of newly arrived French furniture and porcelain, embroidered waistcoats, men’s shirts, and assorted muslins.[5] In an announcement for a sale of Parisian perfumes in 1785, a Madame Paul of Port-au-Prince called herself both a marchande de mode and a “faiseuse,” or maker, of chemises à la reine.[6] Perhaps she had procured something similar to the English copperplate-printed cotton advertised in the same edition of the Affiches by the merchant Assalit; he described these printed textiles as “good for making chemises à la reine.”[7]  With respect to notarial records, the 1786 probate inventory of Marie-Charlotte Bruslé, the widow of a member of the Superior Council living in Cap-Français, recorded six chemises à la reine, with three in a white textile (probably muslin) and three in demi-perse.[8] 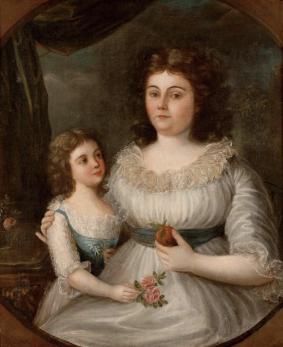 In addition to these excerpts from the Affiches, the visiting baron de Wimpffen recorded how in 1789 “a single petticoat and a loose gown of the finest muslin compose[d] the usual dress” of white women of Saint-Domingue.[9] “Mulatto women,” according to the creole gentleman Moreau de Saint-Méry, adopted the same “light gown worn as undress by white women.”[10] The visual record for French island colonies is regrettably limited, but contemporary portraits from the greater Caribbean Basin provide insight on the appearance of chemise gowns that women across the social spectrum were apparently wearing. The Mexican-born painter Josef de Salazar worked in New Orleans from the mid-1780s until his death in 1802, producing a compelling corpus of portraits that are among the earliest known to survive from the region.[11]  A portrait of Madame Fortier of New Orleans is believed to be one of Salazar’s first commissions. With her daughter Julie at her side, she sat for her portrait not in silk, but in a white chemise gown that appears to be trimmed with lace, a blue sash around her waist.[12]

Moreau de Saint-Méry drew connections between creole clothing more generally, indolence, and luxury, especially the manner in which these were affected by the heat. With respect to the chemise gown, he wrote that, “dressed with a lightness demanded by the climate,” his white countrywomen “appear[ed] even freer in their gestures, and better suited to arouse thoughts of voluptuous delight even more seductive than the nonchalance of their movements.”[13] The baron de Wimpffen also noted the suggestive quality of muslin gowns in 1780s Saint-Domingue. As he surveyed the “carnation tinge that floats across this light dress,” it did not take him long to separate the “impostures of art from the real treasures of nature.”[14] This seductive allure is perhaps visible in a beguiling portrait miniature of the noted creole beauty Louise d’Avezac, who emigrated from Saint-Domingue to New Orleans by way of Jamaica in 1803. Shortly after her arrival in Louisiana, she met and married New Yorker Edward Livingston, later secretary of state under Andrew Jackson.

If the silhouette of the gown worn by the future Mrs. Livingston is no longer that of a true chemise dress like Marie-Antoinette’s chemise à la reine, her portrait certainly enables the viewer to observe the same “carnation tinge” seen by Wimpffen in 1789. Like the queen, colonial women were not exempt from moralistic criticism for their choice of dress, and the chemise gown can be seen as marking an important transition between the fashions of the eighteenth century and those of the nineteenth. Within the context of the French Caribbean, it is striking to see discourse like that of the creole Moreau de Saint-Méry and the European baron de Wimpffen implicate colonial clothing within larger debates on gender, luxury, morality, and even race. Regardless of whether or not they actually sought to subvert or challenge any cultural status quo through dress, Caribbean women, from the marchandes modistes of colonial Saint-Domingue to Madame Fortier and Louise d’Avezac, emerge as compelling figures in an Atlantic world where the stakes of revolution might toe the line between the political and the sartorial.

[1] Referred to as a shift in English, the chemise was usually made of linen and sometimes cotton. Women would have slept in their chemises, which generally came down to about the knee and had elbow-length sleeves. Stays or the less rigid corset (jumps) were worn over the chemise before putting on outer garments like a jacket or gown.

[2] After rumors spread that the muslin had been imported from the Austrian Netherlands, the gown’s very materiality was even cast as an assault on the French silk industry. See Caroline Weber, Queen of Fashion: What Marie Antoinette Wore to the Revolution (New York: Picador, 2006).

[10] Médéric Louis Élie Moreau de Saint-Méry, Description topographique, physique, civile, politique et historique de la partie française de l’isle Saint-Domingue, vol. I. (Philadelphia: 1797), 93. Of additional interest is an excerpt from the memoir of Marc-Antoine Caillot, a clerk of the French Company of the Indies; on the way to Louisiana via Saint-Domingue in the late 1720s, he wrote “There are […] quite a number of very pretty Creole women [whose] clothes are a dazzling white, whereas they are not, though they would seem to be.” See Marc-Antoine Caillot, A Company Man: The Remarkable French-Atlantic Voyage of a Clerk for the Company of the Indies, ed. Erin M. Greenwald, trans. Terri Chalmers (New Orleans: The Historic New Orleans Collection, 2013), 51.

[12] Frustratingly, Madame Fortier’s succession papers do not itemize her wardrobe. See the Records of the Louisiana Cabildo (Louisiana State Museum), 1790-01-05-01. Although it might appear otherwise, she is also likely wearing a softer, possibly even unboned pair of stays or jumps in keeping with period conventions.