Today’s #ColonialCouture post is by Ben Marsh, senior lecturer in history at the University of Kent and author of Georgia’s Frontier Women: Female Fortunes in a Southern Colony (University of Georgia Press, 2012). His current research project is “Silk and the Atlantic World, c. 1500-1840.” Follow him @MarshBen1.

You can find the strangest things in toilets. When Katherine Wheelwright Nanny Naylor (1630-1716) and her remaining two children filled in a brick-lined privy at the back of their yard in Ann Street, perhaps downsizing in the 1690s after having once run her own business from a fine waterfront lot on the north side of Boston Harbour, they inadvertently left a message preserved in the marine clay. When the site was excavated in the 1990s (at the point of being built over by the city’s Central Artery), it flushed up over a hundred fragments of different textiles.[i] This is tipping point three. 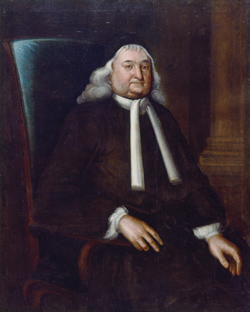 Tipping point two belongs to Samuel Sewall (1651-1730) – the judge and businessman often treated as a sort of moral barometer for puritanism, thanks to his famous remorse about the Salem witch trials and his published critique of slavery, The Selling of Joseph (1700). Sewall reached a personal tipping point in 1693 when he wrote to his factor, John Ive, to cancel an earlier order he had placed for luxurious fabric from London, explaining that “one reason made me forbid sending [for] the Silk, out of a particular dislike I had to the wearing so much in this poor country.” Sewall told Ive he wanted to purposely avoid pretending “a Grandure far beyond my estate.”

Our first tipping point took place in the County Court at Northampton, Massachusetts in 1676. There, sixteen-year-old Hannah Lyman (1660-1736) was presented before the magistrates, as dozens of her female peers had been in recent years, and expected to behave in an appropriately contrite and submissive way. They had all faced chastisement and been prescribed fines for indulging in “overdress” – particularly for their unchecked wearing of silk hoods, in spite of their age or status. As a consequence of her misdemeanour, Lyman was fined ten shillings in January 1677. 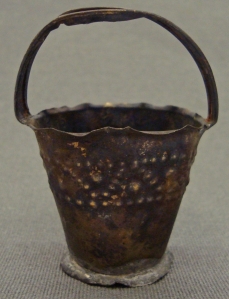 Put together, these three decisive and personal moments – physical, psychological, and legal – in the final quarter of the seventeenth century help us to track the ongoing conflict in Massachusetts between the perception and reality of luxury consumerism. On the surface, they tell us that the restraining tenets of puritanism clearly remained a powerful force in shaping how New England populations approached and understood their fashion choices and their textile worlds, in spite of demographic and economic declensions of one sort or another. Choices about what to discard, what to buy, and what to wear, were made in the knowledge that they could have dramatic social consequences. For one’s dress was not only a reflection of one’s faith, wealth, and status, and a way of marking out the personal: it was a part of a much larger social construction, a sartorial covenant stitched out of innumerable dress decisions taken each day, that ought to have stretched across the ordered shape of the wider body politick.

Puritans’ attitudes to silk in the New World had always captured some of the paradoxes of their situation as wilful exiles seeking to prominently display their sociological credentials. John Winthrop’s famous “City upon a Hill” sermon – long a choice seasoning added to the speeches of American politicians (of all leanings) to add historical kudos to their claims – carried more than metaphorical meaning when it came to dress, and the idea that “the eyes of all people are upon us.” As a trapping of wealth, and also a seductive superfluity – so visible, of course, in frowned-upon Catholic liturgy – silk’s permissibility was under constant negotiation. As early as 1634, the General Court in Boston expressed its disappointment at “the greate, supfluons, & vnnecessary expences occaconed by reason of some newe & immodest fashions,” and passed a sumptuary law prohibiting certain items (including silks) and hairstyles. Residents were invited to come forward if they saw anything “prejudicial to the common good” including the fad for slashed sleeves.[ii] Nor was this just a Boston problem: the Court conferred with church elders from the townships in 1638 and asked them to warn congregations against “costliness of apparel,” but with little effect, perhaps because as Winthrop himself suspected, “divers of the elders’ wives, etc., were in some measure partners in this general disorder.”[iii]

By 1651, the Massachusetts Bay General Court felt the need to take more drastic action, because the sumptuary laws “hath not yet taken that efect which were to be desired, but on the contrary…intollerable excesse & brauery hath crept in vppon vs, & especially amongst people of meane condition, to the dishonor of God.” They found it particularly offensive that women of low rank “weare silke or tiffany hoodes or scarfes,” and forbade the wearing of these and other items unless the wearer was from a household valued at over two hundred pounds.[iv] As the need for these laws suggests, the New England colonies from the outset constituted a market, albeit a slim one, for silk products from the Old World. Although woollens, worsteds, and linens dominated early New England cargoes, there was a regular if more modest influx of silk fabrics and especially decorative “silke wares” arriving in the region, often in fairly sedate forms – mixed with worsted, as simple taffetas, or unostentatious “Turkie grograine,” coarse and lacking in lustre. In 1651, the year sumptuary laws tightened up, the ship Gould Lyon arrived from Bristol with no less than “38 p[ar]cels of silke” for one merchant and “15 ounc[e]s colored silke,” “8 doz[en] silke & silver buttons,” “4 yds color[ed] taffety,” and an assortment of silk ribbons and bands for another.[v] 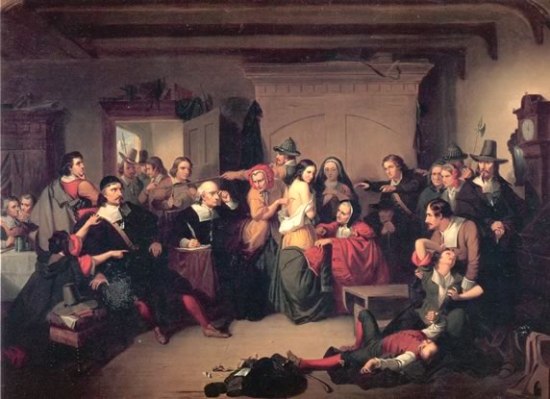 The bite of moral sensibilities had always been less ferocious than their bark then, but closer inspection of our three anecdotal tipping points suggest that by the final quarter of the century, the gap had meaningfully widened. It wasn’t as if silks had become theoretically more bearable and therefore wearable: luxury fabrics were prominently condemned in the religious jeremiads issued from the 1670s, and the language of the jeremiad resurfaced in sumptuary legislation passed by Connecticut’s General Court in 1676. Thenceforth, as in Massachusetts, wearers of silk ribbons, scarves, or trimmings stood in danger of a ten shilling fine, unless they could prove their worth by estate value or by connection to a public officer in the colony.[vi] And naturally, when the devil appeared to young New England women, he was expected to offer them “silkes”; his witch accomplices were identified at the Salem trials as wearing “fine Cloaths in a Sad coloured Silk Mantel,” and silk hoods.[vii] What seems to have changed was that Massachusetts residents were managing their self-presentation more defiantly, subtly, and extensively than they used to.

At tipping point one, Hannah Lyman did much more than rock up to her indictment in Northampton making some pathetic nihilist statement along the lines of “I Really Don’t Care. Do U?” She took the notion of her presentment to a different level, and stood before the magistrates deliberately sporting the self-same silk hood for which she had been hauled before them: “wearing silk in a flaunting manner in an offensive way and garb, not only before, but when she stood presented.” The ten shilling fine was perhaps a price worth paying for the political statement she won the chance to make.

Sewall’s self-presentation was less forthright, but no less careful and intentional. He may have occupied the high moral ground in his letter to his factor, but to take his correspondence in the round, we find that the very previous day, Sewall had written to his cousin Edward Hull, with an extensive textile order which included fifteen pounds weight of “Cloth colourd Silk” and sewing silk (in orange, blue, red, white and black), along with “a pattern of good strong colourd Silk for a Jacket,” “a p[iec]e of Alamode” (glossy silk) and chequered galloon (expensive trimming)! In these two letters on successive days in 1693, Sewall’s hypocrisy marked out one path through which display of silk was bypassing private disquiet in New England. For those who could afford it, the multiplication of sources of imported silk wares offered greater scope than ever before to treat separately the morality and reality of consumption, even if qualms of conscience complicated life and domestic accounts. By the 1700s, Sewall was ordering at the most elaborate end of the market: flowered lustrings and damasks, with specified criteria – “Let the flowers be of Herbs or Leaves; not of Animals, or artificial things.”[viii]

To return to the third tipping point, among Katherine Nanny’s hundred-plus household discards, roughly a third were silk fabrics, a quarter silk ribbons or other decorative silk constructions, and another quarter silk yarns or mixed silk fabrics (the remainder being wool and cotton). Many of the silk fabrics were taffeta, often used for women’s hoods, aprons, and gowns, and there is evidence that plenty were sewn into garments, for instance as fancy sleeves. The majority were plain weaves, which made them less glossy and more durable, another way of managing self-presentation without compromising quality.[ix] Among the fragments were lightweight silk gauze, silk-knit stocking material, and silk bobbin lace (trimming for outer garments). The silk ribbons were short and varied, many of them perhaps offcuts, typically between one and two centimetres in width and less than thirteen in length. They would have been used to accessorise all parts of the body: hats, shoes, collars, sleeves, and shoulders, and a few had lustrous satin or complex weaves that made them stand out. How exactly these fragments ended up inside Katherine Nanny’s privy is unclear. It likely involved some combination of accidental discarding (for instance by children) and intentional depositing (of scraps from retrimming garments, or of her second husband’s belongings). But what does seem clear is that this was a well-dressed Boston family of good social standing, and that an important means of expressing this status was through the purchase, display, and adaptation of a wide range of silk wares.[x]

I guess the moral of the story is that there may be more stories behind the morals when it comes to Massachusetts colonists and what they chose to buy, wear, or discard at any particular point. The thousands of decisions taken about dress constituted critical moments of social reflection, half in conversation with one another. Where we can find them, like the gaps in slashed sleeves, they expose colourful glimpses of self-perception and self-projection – whether someone was making a stand, burying the truth, or throwing out yesterday’s cherished finery.

[ix] Ordoñez, Margaret T. and Welters, Linda, “Textiles from the Seventeenth-Century Privy at the Cross Street Back Lot Site,” Historical Archaeology, 32, no. 3 (98): 82.

[x] One scholar has speculated that “The cloth was probably used by Katherine Nanny to affirm her former rank and to attempt to provide her female children with a rank attractive for marriage whether or not she had the same economic position as before her separation from her husband.”