“The origins and causes of the Revolution remain the two least studied parts of the Revolution in the last thirty years.” So we suggested in these pages back in spring. Was that assessment correct? Where have historians got to in understanding the origins of the revolution; and where do we still need to go? All this week, members of The Junto will weigh in on the question of causes, in an effort to take stock. This is not intended as a definitive overview of current scholarship. Rather, we’ll be exploring our own idiosyncratic approaches to revolutionary origins, and to the recent scholarship that interests us. We invite you to join in the conversation! 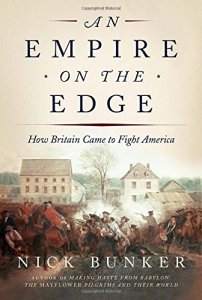 Beyond any new discoveries of evidence and perhaps new technological capacities, every new generation of historians has something unique to contribute to the study of the past—a consciousness of its own time and place. History is written on a tightrope between then and now. Even telling the same story again will always come out differently. Each time you walk the tightrope, there’s a slightly different view. In Nick Bunker’s recent trade book, An Empire on the Edge: How Britain Came to Fight America (Knopf, 2014), that slight shift of view comes from the economic crisis that took hold in 2008. At his most interesting, Bunker presents the revolution as a story of concatenating crises, how states try to deal with them, and how they are transformed in the attempt. The dominant context for Bunker’s account is not ideological or cultural. It’s what Sven Beckert would call “war capitalism”—the entwined processes of empire and commerce. END_OF_DOCUMENT_TOKEN_TO_BE_REPLACED