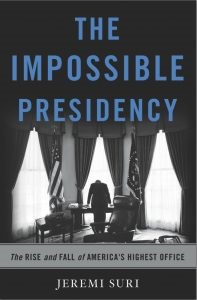 The question of whether the office of the Presidency is too unwieldy with its ever-expanding duties has once again engaged pundits. Most recently, journalist Scott Dickerson’s article raised the issue, a piece which includes the recent study by Jeremi Suri, The Impossible Presidency (New York: Basic Books, 2017). Presidents often used similar rhetorical messages–from Washington to Franklin D.Roosevelt. Suri views one of the mounting obstacles to the presidency as being a discursive problem. Interestingly, the use of language, so central to the presidency, with its surprisingly similar messaging overtime, produced unintended, and often times, inverted outcomes in its collision with capitalism and technology. Suri is currently Mack Brown Distinguished Chair for Leadership in Global Affairs and Professor in the Department of History and the LBJ School of Public Affairs at University of Texas, Austin.   END_OF_DOCUMENT_TOKEN_TO_BE_REPLACED