Edward E. Baptist. The Half Has Never Been Told: Slavery and the Making of American Capitalism. New York: Basic Books, 2014. 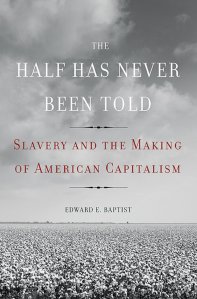 The Half Has Never Been Told attempts a difficult feat: to analyze slavery’s place in the history of American capitalism, but also describe it as a lived experience. This is a story about commodities, bonds, and blood.

To join the abstract and the concrete, Edward Baptist relies on extended metaphors. His narrative traces the form of a human body: the ten chapters move from “Feet, 1783-1810” through “Tongues, 1819-1824” to “Arms, 1850-1861.” Overall, the narrative book follows an image, adapted from a Ralph Ellison essay, of “slavery’s giant body,” stretched across the territory of the United States, serving as the stage on which the drama of American history is acted.[1]

This device works very well, although Baptist occasionally mixes metaphors. One passage likens airborne cotton fibers, the stories of enslaved people, and a layer of radioactive debris left in the fossil record by “a dinosaur-killing asteroid.” A surprisingly long section of another chapter relies on the various meanings of the verb “fuck.” Such passages, along with the controlling image of American slavery’s body, amount to a big risk. In general, however, they are a powerful way to remind readers that political and economic abstractions—“investment,” “expansion,” “productivity”—are also ways of describing the suffering of real human flesh.[2]

Another narrative habit may make academic readers uncomfortable. The Half Has Never Been Told is full of vignettes dramatizing the lives of particular slaves and ex-slaves. Most of these stories are based on oral histories and other forms of documentary evidence. Many of them are remarkable discoveries. Some of them, however, blur the line between creative nonfiction and fiction. One vignette, for example, describes an anonymous slave girl being assaulted on a bed with a sack of cotton seeds underneath it. As far as I can tell, this story is invented, but that is not clearly indicated. This scene’s inclusion was unnecessary; the same chapter includes several references to real, named women who were sexually victimized by slavers. In fact, the rest of the chapter is an excellent (and thus highly disturbing) depiction of the roles sexual exploitation played in the American slave system.[3]

In an early endnote, the author explains that he provides such details as dramatic extrapolations based on the full spectrum of evidence available to historians—standard practice, he says, in “evocative history.” This is reminiscent of appeals made by his Cornell University colleague Aaron Sachs (the co-editor, with John Demos, of the New Directions in Narrative History series) for adopting the techniques of imaginative literature in academic history. In The Half Has Never Been Told, however, Baptist presents most of his vignettes without the markers and qualifications that typically caution readers about the limits of a historian’s documentary evidence.[4]

Whatever the wisdom of that approach, it is more important that The Half is, at its heart, an argument about the economics of slavery. Specifically, Baptist argues that antebellum slavery worked. It was a highly (and increasingly) efficient labor system. As the source of America’s most important commodity, it stood at the center of American capitalism, both southern and northern. And as the central fact of American capitalism, it drove U.S. expansion into and beyond the Mississippi Valley.

Again and again, Baptist draws the reader’s attention to the figures for yearly southern cotton production. His crucial claim, spelled out in chapter four, is that increases in cotton productivity before the Civil War resulted not primarily from improved machinery or breeds of cotton, but rather from the refinement of the “pushing system” on southern plantations. Overseers, applying the logic of commodity capitalism to the labor of field hands, learned how to set escalating daily picking quotas, enforced by brutal punishment, for maximum efficiency. Baptist calls this labor system “the whipping machine,” after a torture device supposedly invented by one entrepreneurial Louisiana planter to extract labor from his slaves. Considering the place American cotton had in world manufacturing, Baptist argues, this means that “systematized torture was [crucial] to the industrial revolution”—and thus to capitalism itself.[5]

As white Americans lusted after the profits from slavery, including the profits from textile manufacturing in the North, American and British financiers provided the capital to keep slavery flowing into the West. In 1831-1832, Baptist observes, five percent of all commercial lending by the Bank of the United States passed through the hands of Isaac Franklin’s slave-trading firm. Slave mortgages kept planters across the South liquid. They also encouraged indebted slavers to keep moving. Their attempts to stay ahead of debt collectors in the U.S. were part of why the number of slaves in the Republic of Texas increased from 4,000 to 27,000 in just nine years. And by the 1830s, Baptist observes, “a completely commodified slave” could be bought and sold on British financial markets—“not a particular individual who could die or run away, but a bond that was the right to a one-slave-sized slice of a pie made from the income of thousands of slaves.” The parallel with twenty-first-century securitized home mortgages is consciously made.[6]

Recent developments in the history of capitalism, as well as the growth of interest in the field, unquestionably reflect the financial conditions of the Second Gilded Age. The acceleration of transnational investment since 1995 and the turmoil of the years since 2007 have thrust financial instruments—and, more broadly, wealth’s abstraction from labor and consumption—into the forefront of American historical discussion.

One result is a tendency in new scholarship to consider capitalism as defined primarily by banking rather than industry. Already a study like John Ashworth’s Slavery, Capitalism, and Politics in the Antebellum Republic (released, incidentally, in 1995 and 2007), or the essays in 1999’s Terms of Labor: Slavery, Serfdom, and Free Labor, edited by Stanley Engerman, seems like the product of another age. When today’s researchers imagine capital, they probably imagine instruments printed on paper, not forged of iron and earth.

Meanwhile, though, awareness of global human trafficking, other forms of migration, and the “commodification of intimacy” in the communications age have spurred historians to uncover economic-power relationships beyond traditional forms of labor. Not least useful is the way the new sensitivity facilitates a fuller understanding of the labor of nineteenth-century women, both enslaved and free, including sexual and reproductive labor. And above all, the history of slaver capitalism is now the history of the “commodification” of human beings.[7]

It is that commodification of people that Baptist is committed to exposing. “It is a maxim,” Ralph Waldo Emerson wrote in 1860, “that money is another kind of blood.” In Baptist’s telling, antebellum financial instruments didn’t simply circulate like blood; they were measures of it. The story of American economic development is the story of American slavery.[8]

It would be difficult, without writing a much longer review, to do justice to the scope of Baptist’s book, and particularly to the richness of detail the author uncovers and synthesizes. The Half Has Never Been Told amounts to a powerful counternarrative of early American “progress.” It should be valuable, both in and out of classrooms, as a template for remapping readers’ understanding of the young country’s economic development.

[1] This review is based on an electronic advance review copy provided by the publisher. It did not include standard page numbers. When referring to specific passages, therefore, I will cite chapters only. The explanation of Ralph Ellison’s image comes in the introduction.

[2] Edward E. Baptist, The Half Has Never Been Told: Slavery and the Making of American Capitalism (New York: Basic Books, 2014), intro. and ch. 7.