Modern Mormonism is known for being a predominantly white religion—at least in America. But a new book by religious studies scholar Max Mueller argues that the LDS faith has a complex and evolving story of racial imagination during the antebellum period. This is a declension narrative that is at once riveting and wrenching, and one that deserves a close reading. 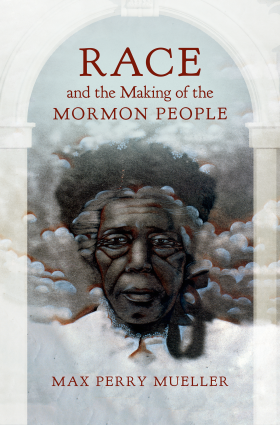 The Church of Jesus Christ of Latter-day Saints, commonly known as the Mormons, had audacious beginnings. They claimed a new book of scripture, a modern-day prophet, and a restored ecclesiastical structure. It was a reenactment of Christianity’s origins. And according to Max Mueller, those origins included a reformulation of America’s racial imagination. Contemporaries during the mid-nineteenth century were, to use a complex and problematic term, “secularizing” racial differences. They sought to justify slavery and segregation through a strict delineation of racial compartmentalization. Race, in other words, was becoming a fixed identity. But among Joseph Smith’s radical protests was an attack on that very assumption: Smith, the book Smith translated, and the movement Smith led, posited that race was a malleable component dependent more on righteousness than descent. They believed in a moderate “racial universalism” that, though it required the subjugation of non-white races, could unite the entire human family. Or, at least, they believed this during their first two decades, before eventually succumbing to a much more mainstream structure of racial difference.

Mueller begins his tale with the text that launched the new religious movement: the Book of Mormon. Indeed, the first chapter of Race and the Making of the Mormon People is perhaps the most sustained and novel treatment of the scripture to appear in a historical monograph in some time. It was within this text that the roots of Mormonism’s racial universalism are found. Though proclaimed to be a history of America’s ancient inhabitants, Mueller argues it set the stage for Mormon racial thinking writ large, both red and black. The Lamanites, those unwilling to follow God’s command, were cursed with a skin of blackness. But importantly, that curse was not permanent, and at times it was mutable. Race was, in Mueller’s analysis, “literally and figuratively skin deep” (38). One of the most powerful prophets in the tale, Samuel the Lamanite, pointed toward racial redemption, and Mueller contextualizes him with other non-white voices in antebellum America like Jarena Lee, Samson Occum, and Elias Boudinot. The complex—and often overlooked—Book of Mormon makes a provocative argument that race, while indeed significant, was not determinant.

Early LDS missionaries were then tasked to spread this gospel to the vast landscape of humanity. Mueller argues that they shaped their message to meet the needs of their various listeners, and that “to make restoration appealing and efficacious to this family’s current (racialized) lineages–the ‘Lamanite,’ the ‘Gentile,’ the ‘Negro’–required targeted marketing” (63). The first three years of the church witnessed missionary efforts to all three races, but with varying success. They were moderate universalists, hoping to unite God’s people, but their stance often raised the scorn of their neighbors. Constant conflict forced them to evolve. For example, when they were kicked out of Missouri, the Mormons revised their gentile status. Rather than focusing their efforts to shepherding the “lost Israel”—indigenous populations—they now insisted that Anglo-American converts were Israelites adopted into God’s chain through the priesthood and lineal descent. This was reaffirmed through new rituals like patriarchal blessings and missionary initiatives to Britain rather than Native tribes. This slow but steady retrenchment continued in Nauvoo, where new ordinances and theologies, not to mention fear of racial mixing, paved the way for a more drastic restriction policy.

But the Mormons would not complete their circle back to mainstream American racial exclusiveness until they reached Utah. It was there that they codified policies and dogmas that treated Native and African Americans as immovable others, though to different degrees, rather than candidates for assimilation. Frequent Indian wars erased LDS optimism and led them to believe that the indigenous populations—at least the men, anyway—were people who needed firm oversight rather than pastoral care. Brigham Young, who did not share Joseph Smith’s more moderate racial views, helped install a legal structure in Utah Territory that dealt with red and black slavery in a way that differentiated them from the “barbarity” of the Spanish conquistadores and Southern slaveowners. But these initiatives nonetheless cemented a new era of racial hierarchies. Native women were still considered eligible for interracial marriage—something deprived of African Americans—but maintained a subordinate status. Education was promised, but rarely realized. The dreams of assimilation were dashed on the rocks of pragmatism.

Many of the general contours of this story—apart from the astute framing of Mormonism’s moderate racial universalism as a counter to American notions of secular racism—will be somewhat familiar to experts of the LDS past. But there are several significant wrinkles added in Mueller’s insightful text. I will merely focus on two.

The first comes from the book’s commitment to foreground the experience of nonwhite Mormons. Rather than focusing on the institutional church, Mueller is dedicated to reconstructing the lives and layers of individual figures, most of whom were on the margins of the movement. This, unfortunately, gets lost in the first three chapters, but it is demonstrably present in the final three. I particularly enjoyed the detailed exposure to Jane Manning James and, especially, Wakara, a fascinating Ute Chief who proved a potent player in the territorial period. Mueller is to be commended for dissecting these fascinating figures’ stories with such precision.

The second historiographical focus of the book is on what Mueller calls “the written archive” (25). Race and the Making of the Mormon People devotes a lot of space to dissecting how the Mormon “archive”—the collection of written stories, minutes, events, and words that shape the LDS tradition—was racialized in the sense that it was controlled by, mediated through, and produced for white members. From the Book of Mormon, where white compilers were reticent to include the words of Lamanite prophets, to Jane Manning James, who was reliant upon a white interviewer to tell and validate her story, one cannot understand Mormonism’s past without dissecting how that past is preserved. Minority voices, by and large, were excluded from that process, and it takes a careful reconsideration to address that persistent problem.

On the one hand, this theoretical framing was provocative and engaging. Even as someone familiar with the relevant literature, I learned a lot that was new. On the other hand, the analytical interventions could at times feel distracting. It seemed that Mueller, at certain points in this story, was really writing two books: one on the experience of non-white Mormons, and another on how those experiences were recorded. The book argues these two can only be understood in tandem; but, at least in this packaging, the tale can become quite disjointing. Take for example the fourth chapter, which looks at the Nauvoo era and focuses on Jane Manning James: in order to discuss both James and the politics behind her reminiscent narrative, Mueller jumps back and forth between the 1840s, when the events happened, and fifty years later, when James told her story. The intricate details and close analysis found in other areas of the book, which I thought to be the strength of the volume, gets lost in the attempt to appease two timelines.

By asking a particular set of questions, many that have previously remained untouched in Mormon studies, Mueller offers refreshing answers. There are a number of novel concepts found within the book’s pages. But the way one asks and answers their framing questions can have broad implications. Indicative of his training as a religious studies scholar, Mueller sometimes appears to subjugate historical context for methodological analysis. This is also true when considering the endless stream of theoretical meditations, accompanied with their frequent use of complex—and at times jargon-filled—observations. This is reflective, of course, of Mueller’s deep immersion in particular scholarly discourses. As a result, his book should be warmly received within the academic community as a significant contribution; however, it might likewise prove a bit difficult for those not as versed in these methodological debate. Mueller’s sophisticated musings are not for the faint of heart.

But that’s the lamest form of critique—it’s akin to a prospective job candidate being asked their weaknesses, but dodging the question by citing their strengths. Race and the Making of the Mormon People is a mature, meditative, and mighty engagement with a complex topic. Scholars of American religion and race, not to mention those engaged in the academic analysis of Mormonism, will be struggling with his conclusions for quite some time.