Today we welcome Dr. Meg Eppel Gudgeirsson, expert in nineteenth-century U.S. religious history and childhood. She completed her PhD from the University of California, Santa Cruz in June 2016. Her dissertation, “Perfect Child, Perfect Faith: Raising Children in Nineteenth-Century Communities,” is a study of how four religious communities raised their children in an effort to embed their differing goals and identity in future generations. The United Society of Believers (better know as Shakers), Oneida Perfectionists, Church of Latter-day Saints (Mormons), and Berea abolitionists all created specific communities grounded in their unique interpretations of Christianity in an effort to reform and improve American life through challenging rural and bourgeois notions of family, gender, and race. She is currently working on expanding her research on Berea, exploring the role of children in the community’s goals of integrating education in the latter part of the nineteenth century. Dr. Gudgeirsson is a lecturer in the History Department at Santa Clara University, teaching courses on nineteenth and twentieth-century US, California History, and World History. END_OF_DOCUMENT_TOKEN_TO_BE_REPLACED 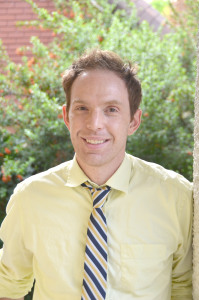 Max Perry Mueller is assistant professor of religious studies in the Department of Classics & Religious Studies of the University of Nebraska-Lincoln, and the author of the recently-released Race and the Making of the Mormon People (University of North Carolina Press, 2017). Be sure and read Ben Park’s review of that book, posted at The Junto yesterday. END_OF_DOCUMENT_TOKEN_TO_BE_REPLACED

Modern Mormonism is known for being a predominantly white religion—at least in America. But a new book by religious studies scholar Max Mueller argues that the LDS faith has a complex and evolving story of racial imagination during the antebellum period. This is a declension narrative that is at once riveting and wrenching, and one that deserves a close reading.

The Church of Jesus Christ of Latter-day Saints, commonly known as the Mormons, had audacious beginnings. They claimed a new book of scripture, a modern-day prophet, and a restored ecclesiastical structure. It was a reenactment of Christianity’s origins. And according to Max Mueller, those origins included a reformulation of America’s racial imagination. Contemporaries during the mid-nineteenth century were, to use a complex and problematic term, “secularizing” racial differences. They sought to justify slavery and segregation through a strict delineation of racial compartmentalization. Race, in other words, was becoming a fixed identity. But among Joseph Smith’s radical protests was an attack on that very assumption: Smith, the book Smith translated, and the movement Smith led, posited that race was a malleable component dependent more on righteousness than descent. They believed in a moderate “racial universalism” that, though it required the subjugation of non-white races, could unite the entire human family. Or, at least, they believed this during their first two decades, before eventually succumbing to a much more mainstream structure of racial difference. END_OF_DOCUMENT_TOKEN_TO_BE_REPLACED

This summer, I’m teaching a small section of United States History to 1877. Meeting four days each week for an hour and fifteen minutes, we cover over the course of seven weeks what is typically covered in shorter meetings three days/week over a normal fifteen week semester. This is my first time doing so, and it’s forced me to rewrite and combine some plans for each day’s meeting, and in some cases, to scrap lecture material normally used. END_OF_DOCUMENT_TOKEN_TO_BE_REPLACED 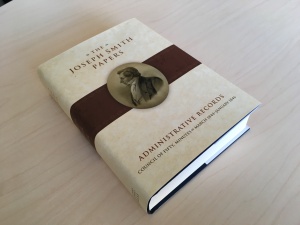 On September 19, a team of editors introduced the latest volume from the Joseph Smith Papers Project to a small group of scholars and bloggers gathered both in person and via skype. I readily agreed to participate when invited because of the excitement surrounding this particular volume. The first and only volume in the Project’s Administrative Series, it makes available the complete 1844-1846 record of the Council of Fifty, a secretive religio-political organization founded by Joseph Smith just months before his June 1844 death. The editors informed me that they wanted a representative from The Junto to attend because they anticipate that the volume’s content will be of interest to many early Americanists.  END_OF_DOCUMENT_TOKEN_TO_BE_REPLACED

Given that we just witnessed the Democrat and Republican national conventions a few weeks ago, I thought I’d draw from a current research project and take a look back at an earlier moment in the development of presidential politics. And if you think Donald Trump’s convention was quixotic, you ain’t seen nothing yet!

Whatever your feelings concerning Joseph Smith, Mormonism’s founder, you have to admit the guy was confident. The first decade of his church’s existence was mired in societal and political problems, and the final year of his life was spent trying to find novel and, to some, outlandish solutions. One of his most audacious proposals was his own candidacy for the United States presidency in 1844.

Smith’s presidential run mostly strikes modern readers as amusing. Though the Church of Jesus Christ of Latter-day Saints had already drawn around thirty thousand converts since its founding in 1830, a majority of them were located on the banks of the Mississippi River in an Illinois town called Nauvoo. They could hardly manipulate the politics within their own state, let alone those of the nation. How then could the controversial leader of this marginalized sect have such delusions of grandeur? END_OF_DOCUMENT_TOKEN_TO_BE_REPLACED

Today’s guest post comes from Spencer W. McBride, who has blogged with us before. Dr. McBride received his PhD at Louisiana State University in 2014 and is now a historian and documentary editor at the Joseph Smith Papers. His research examines the politicization of clergymen during the American Revolution and in the early American republic.

Of the ten amendments that comprise the United States Bill of Rights, the third amendment is arguably the least controversial. Go ahead, think back to your high school civics class and try to remember what rights are protected by the third amendment. Can’t remember? Don’t feel too bad. It is rarely invoked by politicians and political activists, it does not often spark heated debates in the media, and the U.S. Supreme Court has never heard a case in which it was the primary basis. Let’s face it, since the adoption of the first ten amendments to the Constitution, Americans have not been overly concerned that the government will quarter troops in the homes of private citizens without their consent. END_OF_DOCUMENT_TOKEN_TO_BE_REPLACED