I bet few graduate students these days haven’t read, or at least seen referenced, Walter Johnson’s essay “On Agency.” Published a decade ago, the essay was prompted by what had become hackneyed trope in slavery scholarship. Everyone seemed to ascribe slaves a role in shaping their lives—“agency”—despite the power asymmetries inherent in the slave-master relationship. Johnson famously called for an end to this kind of writing. But one of his subtler points may have been lost amid his overarching argument. It wasn’t that slave agency was unimportant, but that it had lost its contemporary relevance. Finding agency mattered in the Civil Rights Era, the years in which the scholarship flourished, because it bolstered African Americans’ claims on the nation’s past, and thus its future. END_OF_DOCUMENT_TOKEN_TO_BE_REPLACED

Ben, Mandy, Matt, and Roy have done a marvelous job so far this week summarizing the arguments, the strengths, and a few of the (few) weaknesses of River of Dark Dreams. I therefore want to confine myself to just a few general thoughts, and then focus in on the area where my expertise lies: what this book means for the non-expert in slavery studies. END_OF_DOCUMENT_TOKEN_TO_BE_REPLACED 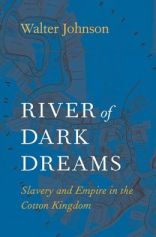 Walter Johnson’s River of Dark Dreams is the best big book on slavery I have ever encountered. This is not faint praise; there is some about the subject that causes its best historians—Eugene Genovese, Winthrop Jordan, Kenneth Stampp and more—to write in at bullet-stopping length. Johnson’s volume stands out due to his ability to seamlessly place the history of antebellum slavery at the intersection of three of the nineteenth century’s key themes—imperialism, capitalism, and technological development. He does this, as other contributors to this roundtable have noted, at the sweeping level of the very geography of Mississippi River Valley and at the much more intimate level of the lived experience of enslaved laborers. END_OF_DOCUMENT_TOKEN_TO_BE_REPLACED

Walter Johnson’s River of Dark Dreams is a meditation on the making of the Cotton Kingdom in the nineteenth century American South. The book is rich with the intimacies and delicacies of detail—details that describe the fundamental material circumstances in which enslaved men, women, and children forcibly transformed Native America into cultivated grids of mono-crop culture at the behest of “Manifest Destiny”; details that are gut-wrenching in their vivid depictions of the social relations of white supremacy—the torture, the hunger, the bleeding, and the raping of the enslaved—the malignant, violent underbelly that made and forcibly maintained the Cotton Kingdom; details that connect the smallest common denominators of plantation life, whether measured in lashes (upon flesh), or pounds (of cotton), or any other metric of rule—to the global economy, which itself connected slaveholders and merchant capitalists from the fields and riverbanks of New Orleans to the factories of Manchester and Liverpool. END_OF_DOCUMENT_TOKEN_TO_BE_REPLACED