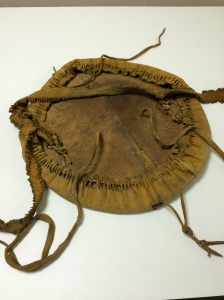 Consider the sixth-grader of 1907. Gertrude F. Greene’s syllabus passed over Plato, sidelined Scottish ballads, and resisted the Alaskan derring-do of The Fur-Seal’s Tooth. At the top of her reading list—first to devour on a snowy winter break from the old Belcher School—she ranked Francis Parkman’s Oregon Trail (1849). In under a century, Parkman had gone from cliffhanger to canon. Why? What might students learn from a 23-year-old romantic historian’s rambles in the Indian country of 1846? Glints of Parkman’s early artistry shone through, but only when you shook up the story a bit. His sketch of life with the Oglala Sioux melded ethnography and emotion, sense and sensation. His Oregon Trail had been greatly curated, edited, and revised in the retelling. And yet Ms. Greene’s sixth-graders missed out on the juicier bits. What Parkman saw (“a strange variety of characters”), what Parkman heard (“harsh and guttaral” dialects), and what Parkman ate (buffalo, fish, dog) on the road filled his private journals, first made available to readers in the 1940s. There, stashed away in the “no-filter” notebooks that Parkman used to piece together his first blockbuster, lay the real adventure.

To read Parkman’s Oregon Trail notebooks, as his biographer and historical editor Mason Wade pointed out, is to soak up the antebellum prairie and plains in the raw. In small but significant moments, Parkman’s story forked away from the scholarly history that he eventually produced. Little details bloomed. At Fort Laramie, he watched as travelers paid $2 a cup for sugar, $1.50 for cheap tobacco, or 75 cents for a pound of bullets. Riding with well-connected guide Henri Chatillon and others, he met Daniel Boone’s grandsons, haggard but still tugging westward. Parkman’s portraits of people and nature were razor-fine as ever. In his notebooks, Parkman recorded watching one Russel, “drunk as a pigeon,” likely on “Missouri whiskey.” He recalled scooting in and out of snake- and frog-choked swamps for his quick and not-so-frequent baths. He took in the pageantry of “full-dress” war parades and admired “rebellious squaws.” Parkman’s West was bright, loud, alive. Everywhere he turned, buffalo haunted the page and Native American song filled the forest air. Part western totem and part necessity, the buffalo set his itinerary and guided Parkman closer toward the Oglala Sioux. Native Americans, by the Brahmin scholar’s pen, were no longer depicted as the “noble savages” of the Enlightenment era. Parkman was drawn to, and highly critical of, their rituals, lifestyles, and customs. The young historian had some literary alchemy in mind. He seemed bent on finding a base formula of Native American personality to shape the Iroquois “character” that he later presented, with controversial authority, in The Conspiracy of Pontiac (1851).

Ever tried to read your old research notes—aloud? That’s how Parkman, his health broken by the rigors of the trail, composed his first book during a series of restorative spa trips. “Heroic historian” or not, Parkman’s collegiality proved to be a plus. His travel companion, Quincy Adams Shaw, helped Parkman to compose the Oregon Trail by reading aloud from his private notebooks during the young man’s recuperation. Parkman’s love of indexing stray ideas and “catch lines” to rough out book paragraphs—hastily set off with dashes—likely made for a tough recitation. For reading Parkman’s notebooks aloud has, if not the grand sweep and glossy curl of his Oregon Trail prose, the salty, bloody punch of a slam-poem about “real” life in the American West. (Sidebar to Lin-Manuel Miranda & co.: What do you think of covering Francis Parkman next?) Here’s Parkman, proofing out his catch-lines to narrate the Paxton Boys’ massacre: “In my last / Besides this tribe / Whilst these precautions / Whether this butchery / Whilst they were upon their march / In the morning / Notwithstanding / The day passing over / Before I proceed.”

Finally, in the spirit of Francis Parkman’s summertime research and discovery ventures, I’m sharing here some artifacts he collected on the Oregon Trail, held at the Massachusetts Historical Society, in the hope of crowdsourcing details about them (catalog info below). Onward!

Artifact 1520.01  SIOUX BOW: “Single curve wooden bow of two woods spliced together with ends narrowing to points which have been closely wrapped in sinew cord; bow string made of twined sinew tied at top of bow with addition of tuft of horse hair. Grip  made of red and black strips of wool felt tied loosely with white leather thong. A decorative red wool fringe is loosely tied near each end of bow.” 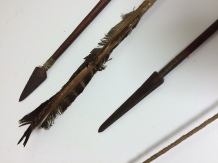 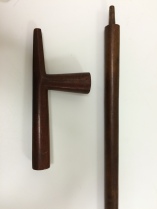 Artifact 1521  SIOUX PEACE PIPE: “Peace pipe consists of long hollowed wood tube, slightly wider in circumference near mouth piece than near bowl, having a narrow extension at each end: the longer extension serves as base over which the collar of a carved stone bowl fits; the shorter serves as mouthpiece. The stone bowl rising from a long pointed base serves as a finial to wood tube. Bottom of stone pipe flattened to prevent pipe from rolling over; pointed tip beyond bowl is six-sided. Both wood and stone surfaces have been polished smooth.” 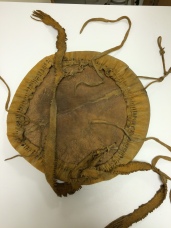 Artifact 1519  SIOUX SHIELD (and above): “Round of stiff bull hide, pierced through in five pairs of points, with suede-finish fringed leather shoulder strap threaded through two pairs of holes and single leather thongs through two center holes. Fifth pair of holes is missing the thongs which tied shoulder strap in. The whole front of shield is  covered by circle of suede-finish leather gathered together on backside by leather thong threaded through regular slits in its circumference. A leather suspension loop is threaded through shield and cover at top.”