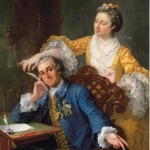 This Colonial Couture post is by guest contributor Ben Marsh, senior lecturer in history at the University of Kent. His current research project is “Unravelling Dreams: Silkworms and the Atlantic World, c. 1500-1840.”

In July 1760, an American correspondent writing to a former neighbor in Surrey, England, graciously thanked them for dispatching a package across to South Carolina, risking the perils of transatlantic post during the Seven Years’ War, to send some cosmopolitan gifts. The gift of a fan was heralded as a “curiosity,” the suit (probably linen, though this descriptor was scored out) was apparently “universally admired,” but the real coup in the package was unquestionably the pompon. Not only was the pompon the prettiest these Americans had apparently ever seen, but the girl it was intended for was delighted “the more so as they are the first of ye fashion that have reach[e]d this part of the world.” END_OF_DOCUMENT_TOKEN_TO_BE_REPLACED