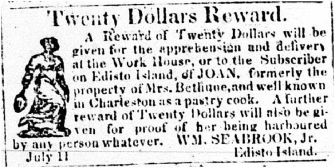 An ad placed in the Charleston Mercury, Charleston, SC, on July 11, 1829. Accessed via: Freedom on the Move

Thousands of enslaved African Americans emancipated themselves by taking flight and escaping their enslavers. One way that this form of resistance to slavery can be studied is through the advertisements that enslavers and jailers placed in newspapers in hopes of turning those who had run away back into “property.” The ads allow us a glimpse of both enslavers’ desires and the defiance of the enslaved. In them, it is possible to read pain and suffering in the record of scars and maimed bodies. The ads hold both the grief of separation from kin left behind and the relief of family mentioned at possible destinations. Historians have long used advertisements for fugitives from slavery to study the institution of slavery and the lives of enslaved people. But it can be difficult for the public to access them because the ads exist in multiple formats across multiple archives.

Freedom on the Move (FOTM), an online project devoted to fugitives from slavery in North America, launches today, February 14, 2019. FOTM asks the public to help in creating a database that makes the stories and lives of fugitives from slavery in North America accessible. The website is designed for use by scholars, researchers, educators, students, genealogist, and the public. After quickly setting up an account, users can begin transcribing digitized versions of advertisements and recording important information included in each ad. Participants can even choose to work on ads from specific time periods or geographic locations. Users can also search for and browse through digitized ads.

Currently, FOTM has about 12,000 newspaper advertisements ready for crowdsourced transcription. The project will include additional ads soon and its organizers hope for future collaborations with additional scholars, archives, and organizations.  FOTM promises to be an invaluable resource in the classroom and for researchers. But beyond the academic applications of the project, organizers hope that the site will facilitate greater access to members of the public outside of the academy. By transcribing and working with the advertisements, participants can both contribute to a growing database of searchable ads and engage with the rich history that each ad presents.

To learn more about the project or to begin contributing to FOTM’s crowdsourcing, visit freedomonthemove.org

At the opening of Colonial Complexions: Race and Bodies in Eighteenth-Century America, Sharon Block poses two provocative questions: “What were the meanings of black, white, and red in the colonial eighteenth century; and how did Anglo-American colonists describe people’s appearance?” (1) To answer these queries Block presents a cultural history race in Britain’s 18th century American colonies. She makes a careful study of the descriptors advertisers and editors used in missing colonial persons adds for runaway African descent and their European and Native American servants. END_OF_DOCUMENT_TOKEN_TO_BE_REPLACED