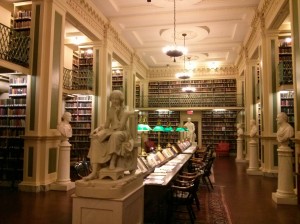 oday’s post is an interview with Carolle R. Morini, Caroline D. Bain Archivist, Reference Librarian, at the Boston Athenæum. Carolle holds a BFA in Photography from the Montserrat College of Art and an MA in History and an MLS in Archives Management from Simmons College.

END_OF_DOCUMENT_TOKEN_TO_BE_REPLACED

Antebellum editors were bulk retailers. Whatever else their business involved, it happened at scale, and I’m often astonished by how much prose a nineteenth-century newspaper or magazine editor could churn out in a day. Of course, most of that prose was recycled, and much of it was banal. As a forthcoming article by Ryan Cordell, based on research by the Viral Texts Project at Northeastern University, observes, the most-reprinted antebellum newspaper articles were pieces of “information literature”—not news, but scrapbookable things like an 1853 starch recipe or a clipping about the dietary value of tomatoes.[1] Apparently, antebellum readers welcomed such textual flotsam—but it was especially useful to editors, who needed a steady flood of context-free, easily resized gobbets of writing for their pages.

The bulk-retail principle applied to literary editors, too, and the difference between “literary” and other kinds of antebellum periodical work is hard to define. For the last couple of weeks, I’ve been thinking about what that meant for the formation of an American literary canon in the antebellum period.

END_OF_DOCUMENT_TOKEN_TO_BE_REPLACED

Like many, Amos Doolittle struggled to turn in a decent first draft of American history. The 21 year-old engraver, later known as the “Paul Revere of Connecticut,” arrived in Lexington and Concord shortly after April 1775. Anxious to capture the battles’ action and aftermath, he chatted with local residents. He sketched terrain. For Doolittle, a trained silversmith, it was a chance to experiment with a craft he had yet to master. Part of what he produced, a set of four views storyboarding the “shot heard round the world,” hangs in the Boston Public Library’s new exhibit, “We Are One: Mapping America’s Road from Revolution to Independence.” By Doolittle’s lights, Massachusetts makes for a furious and frenzied tableau: gusts of redcoats’ gunpowder hazing the sky, and colonial ranks splintering on the advance. On the American side, it is hardly a picture of union. Patriots scatter, racing blindly to frame’s edge. In his rough draft of Revolution, Amos Doolittle demands that we unlock all hopes of what might come next. END_OF_DOCUMENT_TOKEN_TO_BE_REPLACED