“The search for gainful employment drives a willingness to be diverse in your ways of being a historian.” ~ Dr. Kenneth P. Minkema, The Jonathan Edwards Center, Yale University. 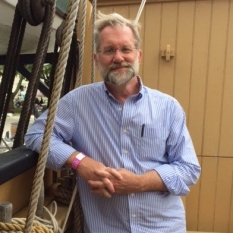 For this week’s “Where Historians Work: The View from Early America,” The Junto features a Q&A with Dr. Kenneth P. Minkema, the Executive Editor of The Works of Jonathan Edwards, and the Executive Director of The Jonathan Edwards Center at Yale University. Dr. Minkema is also a member of the Research Faculty at the Yale Divinity School.

In today’s Q&A, Katy and Ken chat about many topics, including the role that mentors and advisors can play in shaping career choices in graduate school and beyond, and how finding the right “fit” or “vocation” can be a true source of professional inspiration and purpose. END_OF_DOCUMENT_TOKEN_TO_BE_REPLACED

Jonathan Edwards is so strongly identified with Connecticut and Massachusetts that it’s easy to overlook where his pastoral ministry began: near the waterfront of New York City. In 1722, Edwards took a temporary position as the minister to a small Presbyterian congregation in Manhattan. He was about nineteen years old.

Edwards’s months in New York shaped him in at least two ways. First, according to his own account, Edwards developed a stronger desire for personal holiness. In New York, he wished increasingly to be “in everything a complete Christian.” Second, he grew in missionary zeal. Holding long religious conversations with his host family (who were immigrants from England) and observing life in the Atlantic port, he came to a more global awareness of the faith. He put it this way:

END_OF_DOCUMENT_TOKEN_TO_BE_REPLACED

Last week, I attended the annual conference for the Society of United States Intellectual History, this year held in Irvine, CA. It was a fun time, and I learned enough and met enough people to consider the conference a success (and worth the 12 hour flight from London!). Yet one thing struck me the entire weekend, and was reinforced by Mark Peterson who gave words to my thoughts during his session response: why is there a paucity of work on early America within the recent surge of interest in US intellectual history? Or, to ask a different, but still related, question, why do so few historians of early America do work on intellectual history, or self-identify as intellectual historians? END_OF_DOCUMENT_TOKEN_TO_BE_REPLACED