Students of the early American republic: I urge you to apply to SHEAR 2016’s Graduate Research Seminars!

The program, which debuted last year, brings together grad students and senior faculty clustered around four “hot” themes in the field for an hour and a half or so of small-group discussion. Lunch is free. The sessions are open to current graduate students and those who earned a Ph.D. during the 2015-16 academic year. A one-page dissertation abstract is all it takes to apply. Best of all, this year’s lineup of topics and faculty is just as wonderful as 2015’s was. END_OF_DOCUMENT_TOKEN_TO_BE_REPLACED 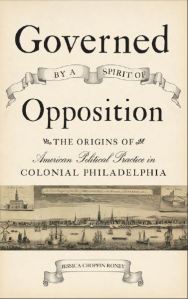 In recent years, early American political history has received considerable attention. A range of historians have enriched our understanding of how Americans participated in and contributed to politics in the early republic.[1] Popular politics during the colonial period has received less attention.[2] But in Governed by a Spirit of Opposition, part of Studies in Early American Economy and Society from the Library Company of Philadelphia, Jessica Choppin Roney focuses on politics in Philadelphia prior to the American Revolution. In so doing, she makes an important contribution to the field of early American history. END_OF_DOCUMENT_TOKEN_TO_BE_REPLACED If Inventing The People is a work of consensus history, it is not one that seeks to celebrate blindly the development of an Anglo-American tradition of popular sovereignty. “The popular governments of Britain or the United States rest on fictions as much as the governments of Russia and China” (13). Indeed, many of Morgan’s most important conclusions in the book are remarkably radical—reminding us that all power is at some level arbitrary, and that appeals to rationality alone cannot justify any single system of government. Indeed, governments that try and conform to the letter of their appeals to the people could not long hope to survive. “The fiction must approach the fact but never reach it” (91). Thus, while Morgan unquestionably concludes there is a coalescence of ideas of popular sovereignty, it is not a reassuring consensus. The consensus on the dominance of popular sovereignty is necessary, for else a community can never be made fit to govern. END_OF_DOCUMENT_TOKEN_TO_BE_REPLACED 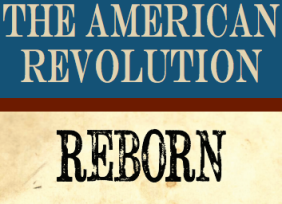