All praise to the humble pamphlet, upon which *may* rest the ideological origins of the American Revolution. Frequently buried by history as loose “Bundells of Pamphlets in quarto,” it’s a genre that almost shouldn’t be. Printed on flimsy paper and easily battered by salt spray or avid readers, the popular pamphlet became a clutch genre for British and American revolutionaries to send ideas around the Atlantic World. These publications, along with newsbooks, hardened into the “paper bullets,” that, according to scholar Joad Raymond, flew on and off the page in early modern England’s press.

Even as the genre evolved into weekly newspapers, he writes, “readers recognized the rules of the form.” Pamphlet culture, a dynamic arena for anonymous critics to take an eloquent swipe at matters of church and state, quickly blossomed abroad. Unbound and unfettered, pamphlets seeded colonists with a new political consciousness. Whether 10 pages or 50, these slim booklets amplified republican politics and revolutionary prose. Pamphlets, as Robert G. Parkinson observes, became the “lifeblood” of the American Revolution. “They instructed the colonial public that political and personal liberty were in jeopardy because British imperial reformers sought to strip them of their natural rights, especially the right to consent to a government that could hear and understand them,” he writes. Today, let’s look at that instructional aspect of pamphlet culture, and how Bernard Bailyn’s interpretation of revolutionary tracts has reshaped what we do in public history. END_OF_DOCUMENT_TOKEN_TO_BE_REPLACED 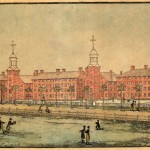 Last week, in the first part of this post, I argued that we tend to justify the liberal arts in two potentially contradictory ways. First, we assert that the liberal arts offer tools for citizenship. Second, we claim they point our way to human values that transcend any community. I argued that both of these justifications or approaches are necessary. I also suggested that early Americanists have not found it easy to explain what we contribute to the second approach.

Today, therefore, I am taking up the question I posed last week. Does early American scholarship offer anything distinctive to the liberal arts as a way of understanding humanity at large? END_OF_DOCUMENT_TOKEN_TO_BE_REPLACED

Perhaps because the traditional academic year has ended, and probably in part because of the tides and undertows of the current election, we seem to be awash just now in excellent essays about the purposes and state of the humanities.

To do my part to put a stop to that, I am here to ask what the liberal arts have to do with early American studies.

I suspect we tend to take the relationship too much for granted.

END_OF_DOCUMENT_TOKEN_TO_BE_REPLACED

Let’s kick another weekly roundup of early American history links off with this fascinating and fun look at Revolutionary-era pronunciations of the word “Huzza(h)!” over at Journal of the American Revolution (hint: it rhymes with “fray”). Continuing with the general theme of historical language and pronunciation, Sam Sack’s New Yorker review of Ben Tarnoff’s newly-released, The Bohemians: Mark Twain and the San Francisco Writers who Reinvented American Literature, includes some reflections on Twain’s use of “unrefined idiomatic English” and “how America learned to hear itself talk.”  END_OF_DOCUMENT_TOKEN_TO_BE_REPLACED

Happy Sunday! With the excitement from March Madness still ringing through the halls at The Junto, we look forward to bringing you more great content on a wide range of issues in early American history in the coming weeks (including an interview with Mike Jarvis, our champion!). In the meantime, let’s head right to this week’s links!
END_OF_DOCUMENT_TOKEN_TO_BE_REPLACED

The semester is in full swing, at least in the United States (hang on, UK readers and Juntoists! It’ll be here before you know it!). And here in New England, after a brutal hot spell midweek, it seems that fall weather has finally arrived.  All of which means we’ve got a busy week to review for you. Without further ado, let’s get on with the links!

END_OF_DOCUMENT_TOKEN_TO_BE_REPLACED

Following on from last week’s post by Michael Blaakman, in which he reflected on his experiences preparing for oral exams and their practical value, I would like to take this opportunity to reflect on another aspect of graduate education. Today—two years, four semesters, twelve courses, a couple hundred books, two research papers, and a dissertation prospectus draft later—I am attending the last seminar session of my coursework. Now, it’s nowhere near the equivalent of reaching ABD, but it is something of a milestone, for me at least. I was a non-traditional student who began my undergraduate work at the age of 32 and went straight from undergrad to a PhD program. So today marks the end of what was effectively six years of coursework.