A silk worm begins wrapping itself round in a cocoon, encasing itself in its fiber. Faceless hands unravel the cocoon, turning it into a single linear thread, the thread then woven together with other linear threads unraveled by other faceless hands until all the threads, warped and wefted, form a connected fabric. Finally, completing the circle, a woman poses for a portrait, wrapped up in yard upon yard of silk, another body encased and shrouded.

It’s a fitting prologue and introduction to Zara Anishanslin’s Portrait of a Woman in Silk, a study in—literally and figuratively—the threads that connected and constructed the eighteenth-century British Atlantic Empire. Anishanslin’s book is not quite like any book that I’ve ever read before. It meanders—but with purpose: from Spitalfields Market in London, to an imagined college in Bermuda, to a parlor in Lancaster crowded with soldiers and military waggoners; from the inner mechanics of the loom, to the symbols within Milton’s Paradise Lost, to the aesthetics of colonial orchards and gardens; from cultural to intellectual to political to spatial to economic to material history. It defies traditional sub-disciplinary designations by design. Anishanslin’s ambitious first book draws inspiration from leading figures in material culture studies—Robert Blair St. George, T. H. Breen, Richard Bushman, Laurel Thatcher Ulrich, and others—but also draws inspiration from book historians like Robert Darnton, from economic historians, from religious historians, and from historians of transatlantic intellectual and epistolary networks. END_OF_DOCUMENT_TOKEN_TO_BE_REPLACED

In a certain village of vast early America, whose name I do not recall, a book fell open. Then another. And another. By 1860, many generations’ worth of American readers had imbibed the two-volume work of Spain’s early modern master, Miguel de Cervantes Saavedra: Don Quixote, or, El Ingenioso Hidalgo Don Quijote de La Mancha (1605). Cervantes’ metafiction of a mad knight-errant, often hailed as the first Western novel, bustled and blistered with originality. END_OF_DOCUMENT_TOKEN_TO_BE_REPLACED

Looks like #VastEarlyAmerica just got even vaster—and that’s a good thing. Here’s our fall preview of new titles. Please share your books/finds in the comments! END_OF_DOCUMENT_TOKEN_TO_BE_REPLACED

On December 8, 1747, Gov. George Clinton (1686–1761) told a British statesman that the Assembly of New York “treated the person of the Governor with such contempt of his authority & such disrespect to the noble family where he had his birth that must be of most pernicious example.” He thought he might have to “give it [i.e., his position] up to a Faction.” The extant copy of this letter, held within Clinton’s papers at the William L. Clements Library in Michigan, was written by his most trusted advisor and ally—Cadwallader Colden, the subject of John M. Dixon’s first book, The Enlightenment of Cadwallader Colden: Empire, Science, and Intellectual Culture in British New York, published in 2016 by Cornell University Press.[1]

END_OF_DOCUMENT_TOKEN_TO_BE_REPLACED

When wading through account books, muster rolls, and other dry military records, I don’t usually get a sense of the author—there might be a name jotted down, or maybe some distinctive handwriting, but hardly any evidence of personality. Reading through a 1758 orderly book from the Oneida Carry was much the same: a recounting of paroles, provisions, parades, and troop preparations. And then, curiously, tucked between the routine orders and work details, on the bottom of the 51st page:

When This You See Remember me.[1]

An—abruptly elegant—personal appeal hidden in the middle of a bureaucratic record, a record covering the various minutiae of one regiment of the vast British military apparatus but containing no information (other than a name) about the man who had chronicled them all. What on earth was it doing here?

This post began as a simple question about the meaning of private voices in the state record and quickly became something a little more meandering—tracing a phrase, finding its ubiquity in the British Atlantic, and then, in that broader context, pondering how and why it came to be on the page of an official military document. END_OF_DOCUMENT_TOKEN_TO_BE_REPLACED 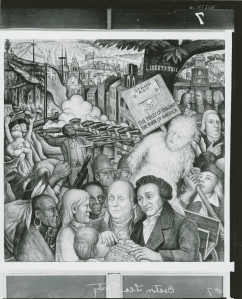 When John Adams looked back on the American Revolution (something he liked to do), he reflected that, “The Revolution was in the Minds and Hearts of the People.” The colonists’ drive to independence marked a new era of American history, Adams thought, when “Thirteen Clocks were made to Strike together; a perfection of Mechanism which no Artist had ever before effected.” Scholars have struggled to frame the experience of the Revolution in picture and on the page. How can we use digital tools to curate collections of revolutionary culture and #vastearlyamerica for use in the classroom?

Today, The Junto chats with Darren Milligan, Senior Digital Strategist at the Smithsonian Center for Learning and Digital Access, about the Smithsonian Learning Lab, which encourages us to make, use, and share new galleries of history.  END_OF_DOCUMENT_TOKEN_TO_BE_REPLACED

Since moving to Massachusetts, in September 2015, I’ve taken great pleasure in visiting some of Boston’s historic sites. I’ve walked (part of) the Freedom Trail and visited the Old State House, Faneuil Hall, the Granary Burying Ground, the Old South Church, and the Adams crypt in Quincy. A few weeks ago, I took it a step further: I went on a duck boat tour. While on the tour, the on-board historian told passengers that Joseph Warren would have been America’s first president if he was not killed at the Battle of Bunker Hill. *MIC DROP* END_OF_DOCUMENT_TOKEN_TO_BE_REPLACED 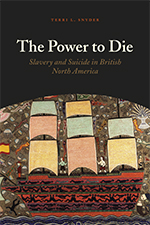 Terri Snyder is Professor of American Studies at California State University at Fullerton who specializes in slavery and gender. She received her PhD in 1992 from the University of Iowa. In 2003, Cornell University Press published her first book, Brabbling Women: Disordered Speech and Law in Early Virginia. The Power to Die: Slavery and Suicide in British America is her second book.

END_OF_DOCUMENT_TOKEN_TO_BE_REPLACED

Abby Chandler is Assistant Professor of History at the University of Massachusetts, Lowell. She received her PhD from the University of Maine at Orono. Her first book, Law and Sexual Misconduct in New England, 1650-1750: Steering Towards England is due to be released by Ashgate in November.

My forthcoming book, Law and Sexual Misconduct in New England, 1650-1750: Steering Toward England, uses sexual misconduct trials to examine the ways in which the growing Anglicization of the New England colonies played a role in the daily lives of ordinary colonists. Such trials may seem an unusual source base for studying broader political change, but their frequency and consistency allowed me to track the often subtle shifts toward more Anglicized legal systems. Likewise, both men and women were routinely charged with sexual misconduct, which allowed me to examine these shifts from male and female perspectives. This is the story of two widows in Essex County, Massachusetts, and their very different experiences with the Puritan dominated legal system of the seventeenth century and the Anglicized legal system of the eighteenth century.

END_OF_DOCUMENT_TOKEN_TO_BE_REPLACED

October 2, 2015 By The Junto Moderator in From the Archives Tags: 18th Century, military history 1 Comment

Emily Merrill is a PhD student at the University of Pennsylvania. Her dissertation, “Judging Empire: British Military Courts and the Politics of the Body,” explores the intersections of gender, military, and empire in the late eighteenth century by examining cases of bodily assault prosecuted by British military courts during the Revolutionary War.

The brutality of military discipline in the British Army, which regularly sentenced enlisted soldiers to severe floggings of hundreds of lashes with the cat o’nine tails for relatively minor crimes—such as drunkenness or not wearing their uniforms properly—horrified civilian observers in Britain and America alike.

What justifications did the officers who administered these punishments give for this customary treatment of offenders? Did they believe that these severe floggings would convince miscreants of the error of their ways, or instill in them a determination to reform their behavior? Or were they unconcerned with rehabilitation, seeking only to inflict suffering upon convicted soldiers in retribution for their crimes? END_OF_DOCUMENT_TOKEN_TO_BE_REPLACED